The curator of "Hong Kong, etc." at the 2nd Johannesburg Biennale about his concept. Written down by Pat Binder & Gerhard Haupt.

Exerpts from an interview by Pat Binder and Gerhard Haupt, publishers of Universes in Universe, with the curator of the exhibition "Hong Kong, etc.", which took place on July 5th 1997 (that means, still during the preparation phase of the Biennale).

In a way the concept of the exhibition "Hong Kong, etc" is quite simple. It has to do with the fact that today, all kind of events - whether it be the power-transfer in Hong Kong, the fall of the Berlin Wall, or Tianamen Square - become spectacular media events, but which seldom retain public attention for more than fifteen minutes. All of these events have a long history preceding them, and a long future ahead of them. Hong Kong is one of these events which represents a very important transition in our time. Even though the transfer of power happened five months ago, it is an event that should be reconsidered and brought into discussion again. Of course, I consider the transition of Hong Kong as a process of decolonization, but on the other hand, it is also a result of current globalization. The event itself offers a lot of possibilities to think about these two closely linked aspects, as well as the neocolonization which is happening now. This is, stated in simplified form, like negotiations between old and new powers.

At the same time, in terms of culture in visual arts, this process generates a lot of new models and allows for new spaces for creative activity, especially in relation to a restructuring of the urban space (for which Hong Kong is a typical example). I think Johannesburg has a similar past to Hong Kong and a similar future, because in this new South Africa, people want to reconstruct a whole society. There is a similar desire regarding cultural and artistic activities, and there are similar projects to redesign the urban environment. There exists, therefore, a relevance between these two places, two situations, two ends of the road. Again, this is not only a kind of regional event, but is part of a globalizing process which doesn´t exclude Western roots. Therefore, there will be coverage of nearly all continents in the exhibition.

When we talk about Hong Kong, and when we talk about globalization, there is a new technology which plays an important role. It is not only a force which accelerates the globalizing process, but is also a new language being created through the new technology. This new language can probably open up a lot of discussions, but we should view it critically. In the meantime, I do think this new technology, the internet for example, changes our way of communication. This is why I want to include web sites in our project, as kind of virtual space in which people can use their imagination in a much, so to speak , "freer" way.

But it is also important to keep one foot on the ground. The exhibition will have a second installation section in a gallery, as well as a sort-of video network in the city. The goal is to build a kind of bridge between the real and the virtual, so that people can perceive two aspects of the whole thing. In fact the scale is very small and at the same time very big. In the gallery space we are going to have ten or eleven artists working very closely to one another. The idea is to rebuild a city, a tiny Hong Kong, in which the aspect of density is very important. On the other hand, by using web sites, there exists a kind of infinitive space.

Mostly there will be new projects. I want to emphasize, too, that it will not only be artists, but also architects, urbanists, writers, and culture theorists who are involved especially for the web sites, and who will be contributing on an ongoing basis. There will also be a debate space for discussion groups, in which a general audience can participate.

© Exerpts from an interview by Pat Binder and Gerhard Haupt, publishers of Universes in Universe, on 5 July 1997 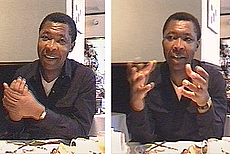 The Artistic Director of the 2nd Johannesburg Biennale about his concept and documenta X. Written down by Pat Binder & Gerhard Haupt after an interview.