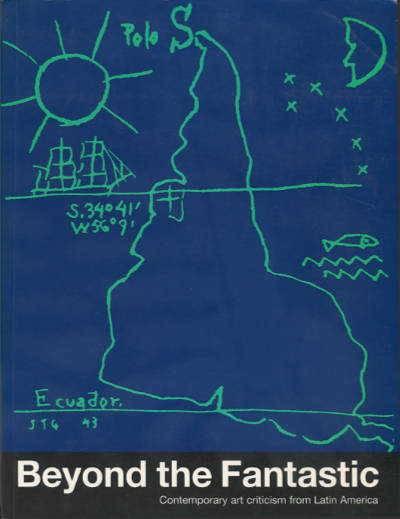 It is without doubt interesting and significant to note that although Latin American art has, in recent decades, gained growing recognition and distribution throughout the world, the texts by critics and theorists from Latin America have been given little international attention. These texts have appeared in isolated form in journals and exhibition catalogs, most often organized by European or North American curators. This means that outside the sub-continent Latin American art has in many cases not been transmitted by Latin Americans themselves. An external vision can without doubt offer some revealing insights, but in the case of this region, the vision is often too generalized, full of commonplaces or simply the product of a Eurocentric understanding of modernity.

It is to this point that the title of this anthology edited by Gerardo Mosquera refers. For the first time, the English-speaking public is offered a collection of major critical and theoretical essays which provide a multiple vision of this art "beyond the fantastic".

In most of these texts, the art of Latin America is the starting point for theoretical analysis and reflection, which make an essential contribution to our understanding of the complexity of contemporary art in general. Thus it cannot be over-emphasized that although this is criticism from Latin America, it is not only for Latin America. The book is important not only to the relatively small number of specialists in Latin American art.

Although in the "West" there is recognition of the increasingly polycentric development of the globalizing processes, not enough attention is being paid to the potential for innovation coming from the supposedly "cultural peripheries". Wolf Lepenies, Rector of the College of Science of Berlin, was quite right to say last year, in the presence of leading personalities from German economic scene, that European societies should leave aside the role of being "teaching" cultures and become "learning" cultures.

It is time to finally revise the obsolete structures of thought which pervade the international art debate - still dominated by a "central" point of view and its media machinery - in order to do justice to the complexity and growing interconnection of the art processes across the world. It can´t be a matter of enlarging the Western building of thought with just some more rooms around its nucleous. The whole decaying edifice should be demolished and rebuilt in a new collective effort by all its participants.

Some progress in this direction would have been made if a book such as "Beyond the Fantastic" had been recognized not only as a regional study but as an important contribution to the general debate.

"This book is a selection of new theoretical discourses on the visual arts in Latin America, dealing with the critical thought characteristics of the 1980s, which is still current today. They constitute a distinctive corpus of writing, a revision of the prevailing paradigms from the early 1960s when Marta Traba published the first book to approach Latin American art in a global manner, attempting to give the subject some conceptual unity. This established a Latin Americanist social theory of art that, although diverse and often polemical, discussed the particularities of Latin American art in relation to culture and society, and which lasted for two decades. The authors included in this book are products of this process, but they reposition it in accordance with the demands of a new period and within the framework of a critique of modernity and of the end of a tragic utopia."

(From the introduction by Gerardo Mosquera)

Beyond the Fantastic:
Contemporary Art Criticism from Latin America

Edited by Gerardo Mosquera
in association with Oriana Baddeley