Call: Donate books for The Parthenon of Books 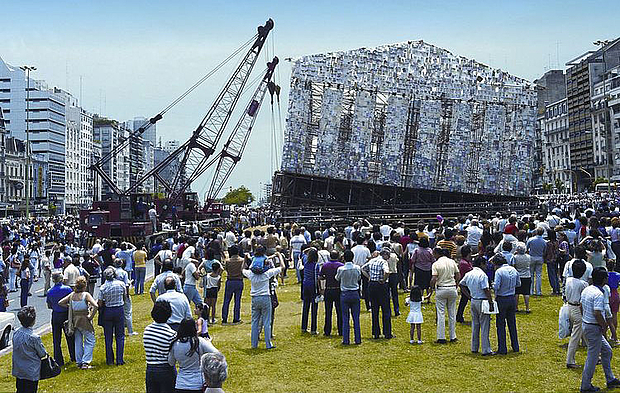 Marta Minujín, documenta 14, and Frankfurter Buchmesse cordially invite the public, publishers, and authors to donate books for the artwork The Parthenon of Books and thereby become part of the work.

The Parthenon of Books by artist Marta Minujín is a decisive symbol of resistance to any banning of writings and the persecution of their authors. As many as 100,000 formerly or currently banned books from all over the world are needed to create the work on Friedrichsplatz in Kassel, where, on May 19, 1933, some 2,000 books were burned by the Nazis during the so-called “Aktion wider den undeutschen Geist” (Campaign against the Un-German Spirit). In 1941, the Fridericianum—which was being used as a library at the time—was engulfed in flames during an Allied bombing attack, and another collection of about 350,000 books was lost.

The installation The Parthenon of Books will be constructed as a replica of the temple on the Acropolis in Athens, symbolizing the aesthetic and political ideals of the first democracy. Minujín’s The Parthenon of Books traces its origins to an installation titled El Partenón de libros, which was realized in 1983, shortly after the collapse of the civilian-military dictatorship in Argentina, and presented the very books that had been banned by the ruling junta. After five days of exhibition, two cranes tipped the installation slightly to one side, allowing visitors to remove the books and take them home. A public action devoted to returning the books to circulation is also planned for the new Parthenon at the end of documenta 14.

How to donate a book?

Everyone is invited to support the realization of the artwork with donated books. Between October 19 and 23, 2016, documenta 14 will be a guest at the Agora of the Frankfurter Buchmesse in order to collect book donations. Your contributions toward the collection of 100,000 books are very important for the realization of this work. Beyond the timeframe of the Frankfurter Buchmesse you are very welcome to send books via mail to Athens or Kassel or drop them off in person.

About the procedure, donation form, etc.
see the documenta website

(From press information by documenta, 6 October 2016)