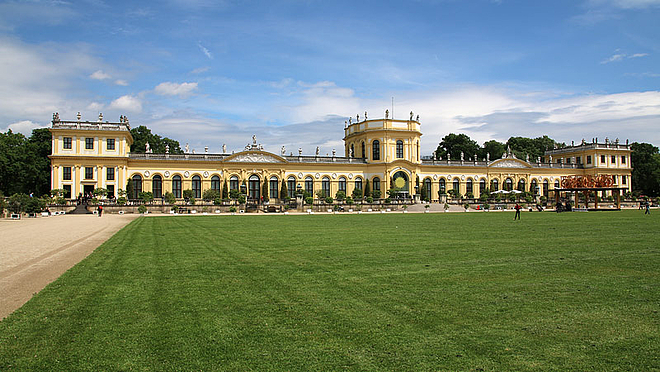 The Orangerie was built by order of Karl I, Landgrave of Hesse-Kassel, at the beginning of the eighteenth century. It was destroyed in World War II. After a complete reconstruction the restored Orangerie was reopened in 1992 as an astronomical museum with a planetarium.

The Park originates from a symmetrical Baroque garden, created during the reign of Landgrave Karl I (1654 - 1730), therefore the name Karlsaue.

The Orangerie served Landgrave Karl I as both a summer house and a winter habitat for potted trees such as citrus and palms. During World War II, the building was bombed and left in ruins until a renovation project began in 1976.

In 1785, under William IX Landgrave of Hesse-Kassel, the extension and redesign of the park to an English landscape garden began. Essential parts of the Baroque layout remained, in particular the three main axis with both channels and the central alley that radiate from the Karlswiese (meadow) in front of the Orangerie (built 1703 - 1711).

Since 2009, the State Park Karlsaue, of about 1.5 square kilometer of extension, belongs to the European Garden Heritage Network, and is a free public green space. Since the 2nd edition of the documenta in 1959 the park has been used as exhibiton venue.

More about this venue