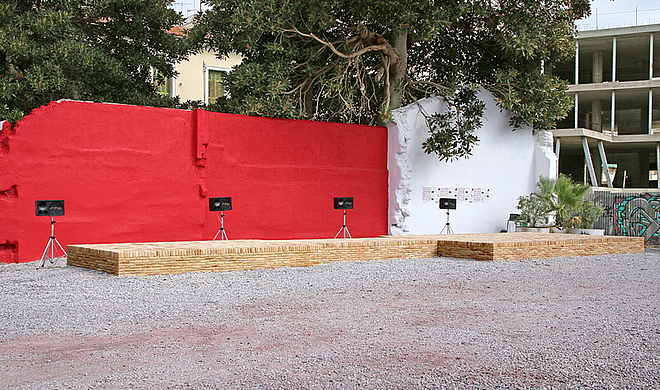 In a prelude to Athenian industrialization, the silk company of Athanassios Douroutis defined the working-class neighborhood of Metaxourgeio (which means “silk factory”) and gave the central square its name. The neighborhood still features a high concentration of production units: metal and wood workshops, printing and car shops, some still active, others obsolete. The former factory of the silk company, one of the oldest neoclassical buildings in the city and now housing the Municipal Gallery, once employed more women than men and yet they were paid less than half the average male wage.

In response to these historical remnants and not-so-past working conditions and inequalities, Sanja Iveković’s Monument to Revolution reimagines Ludwig Mies van der Rohe’s Monument to Rosa Luxemburg and Karl Liebknecht (commissioned by the German Communist Party and destroyed by the Nazis in 1935) as a public stage in Metaxourgeio for workers’ rights, women’s rights, and class struggle.
(From texts by documenta 14)