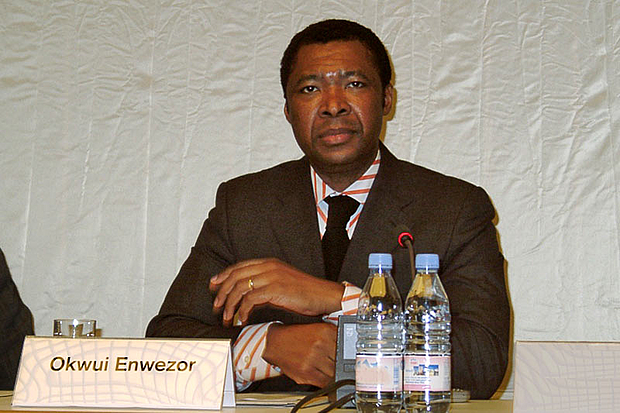 In 1982 Enwezor moved to New York. In 1987 he earned a Bachelor of Arts degree in political sciences at the New Jersey City University. He began his activities in the art field in poetry, performed at venues in the East Village, and started to publish. In 1994, Enwezor launched Nka Journal of Contemporary African Art, together with Chika Okeke-Agulu and Salah Hassan. He became associate curator at the International Center of Photography in New York.

Rise and Fall of Apartheid: Photography and the Bureaucracy of Everyday Life. International Center of Photography, New York

Among Okwui Enwezor's many publications are Postwar: Art between the Pacific and the Atlantic, 1945–1965 (Prestel Publishing, 2017), which he co-edited; Rise and Fall of Apartheid: Photography and the Bureaucracy of Everyday Life (Prestel Publishing, 2013); Contemporary African Art Since 1980 (Damiani, 2010); Antinomies of Art and Culture: Modernity, Postmodernity, Contemporaneity (Duke University Press, 2009); and Reading the Contemporary: African Art from Theory to the Market (Iniva, 1999).