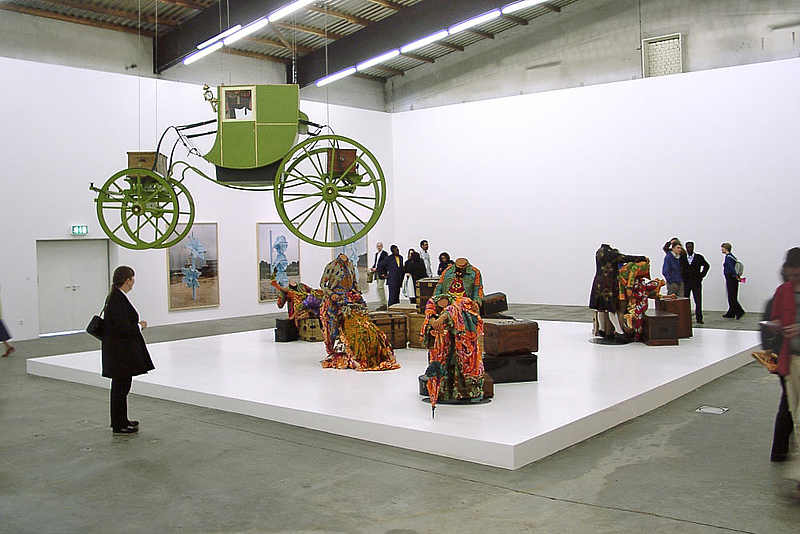 Shonibare makes reference to a "Grand Tour", a country outing of noblemen in the 18th century. The costumes are tailored from printed African fabric.

Yinka Shonibare’s objects and installations form a complex field made up of historical, art historical, cultural, and economic references, thus fundamentally bringing claims of cultural authenticity into question. One of his preferred materials is African fabric, whose colorful, ornamental patterns awaken immediate associations with authenticity and exoticism. This fabric is manufactured using the "Dutch wax" technique, a wax printing process originating in Indonesia, which was exported to Africa via the Netherlands and Manchester's cotton mills in the 19th century. Since the 1950s, the fabric has become a symbol of postcolonial identity, national pride, and cultural difference. (…)
In Gallantry and Criminal Conversation (2002), his work for Documenta 11, Shonibare uses a "grand tour" scene. In the 18th century, the grand tour was a common rite of initiation (including sexual) for young, elegant, British aristocrats. Surrounding a centrally placed, floating horse-drawn carriage, various figures wearing period dress made of African cloth are involved in sexual activities. Shonibare not only constructs a frame of reference in which the exotic material is linked to the desire and "transgressive behavior" (Yinka Shonibare) of the characters, but also refers to economic structures, which were the basis for the various forms of exchange that occurred during these luxurious journeys.
(From the documenta 11 Short Guide)