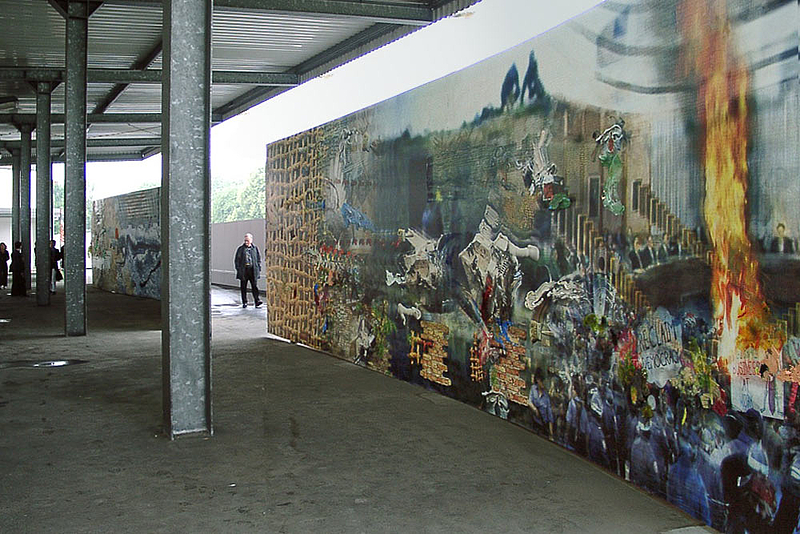 About the work: Interview 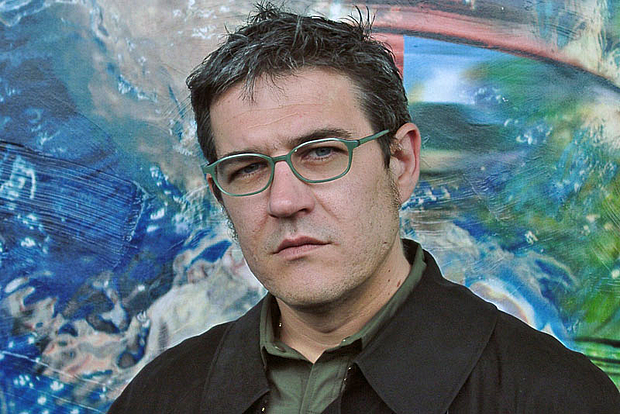 Universes in Universe: What would you consider to be especially important for the understanding of your work?

Fabián Marcaccio: I call this kind of work "Multiple-Site Paintants". Many of the images I use are taken from the Internet. In one sense, it's as though one were to capture material that flows through the Intenet, and to "petrify" it at a certain moment in relation to a space and an architecture. This painting is meant to create a passage between the real architectural and virtual worlds. I am interested in the concept of that which we call "site", especially in the sense of place. "Surfing" in the case of this painting can be taken literally, in that one views the work while strolling by. In this case, I placed the work in a semi-enclosed area, as if it were part of both the exterior and the interior of the building. One can walk by it from one side or the other.

UiU: What role does painting as such play?

F.M.: For me, the relationship between digital and literal or "real" painting, so to speak, is very important. I combine the traditional part of painting, the materials, etc., with the composition possibilities offered by computers and different software.

UiU: What could be said about the iconography you use, your choice of images?

F.M.: The idea is a pictorial analysis of the current state of affairs, the problems of urbanity, political problems, today's constant civil war. I am interested in the dual relationship between "inform" and "give something form" (in-formar, dar forma a algo). Painting is developed as a form, and at the same time "in-forms". That means that all individual areas of the work are like islands of information, like "inner formations" of the painting and at the same time of current themes, like the idea of the body, biogenetics, the problems of violence and human relationships...

UiU: Is the particular context of New York important for the development of your work?

F.M.: Well, my life itself it rather transcultural. I was born in Argentina, and have spent a large part of my life in New York and on regular visits to Europe. From the perspective of my Latin American identity, I try to analyze problems that have to do not only with Latin America, but are part of the world's conflicts. For example, in this work here at the Documenta, there is a clearly defined area which is called "economic concentration camp". Here I analyze how certain countries of the Third World are completely imprisoned, paralyzed, by the international economy. That is what I experienced this year, in particular with regards to Argentina. This area of the work is therefore one of the most brutal, because it touches me directly.