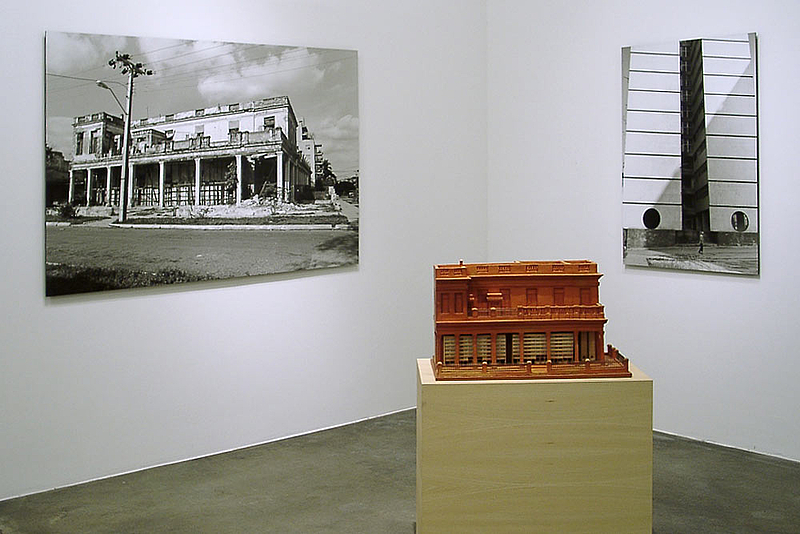 About the works: Statement by the artist

The conception of history as a fictitious element and its reconstruction taking into account its implications in relation to the urban space, have been many of the presuppositions I have worked with in a great part of the work. In some way the project Continuity of Somebody's Architecture arises from these same precepts, though it paves a different path.

In previous works, I acted as an "architect" who re-invented the city from the remains of the ruins I found walking through Havana, a city that was almost totally built before 1959. Those works elaborated from the drawing and installation, a project of future and utopia in a city inhabited by frustration and human and urban deterioration. The fragmentation of the city turned into a metaphor for a "possible" physical and ideological reconstruction by means of luxury and comfort proposals coming from the First, apart from the Cuban reality by more than forty years. On the other hand, I was interested in the projection of the imagination and absurd within the city's urban and linguistic framework.

For this new project, I wanted to go back to my apocryphal trade and incite on Havana again. If I departed from the physical ruins of buildings constructed mostly between late XIX and early XX centuries in a series of previous drawings, now I wanted to be in a more recent point in history. With the participation of an architect, a team of model makers and sculptors, a re-statement of the urban and architectural phenomenon has been done, which has incited more strongly in Havana of the last 30 years: The Social Micro brigade.

During Socialism in Cuba, architecture has had a contingent nature as many other social projects have had. Construction plans have been focused in providing new housing buildings, schools, hospitals, etc., leaving in an almost absolute abandonment the restorations and maintenance of the architectural treasure which constitute Havana City and others in the interior of the island.

Most of the construction systems used, imported from Eastern Europe Socialist countries, have collapsed together with this political project. If there is architecture in Cuba during this period, we could understand it is an aborted architecture, which failed both in its useful and esthetic purposes.

After the declining of the European Socialism, many Cuban architectural works and projects have been stopped and abandoned. In Havana, as in other cities of the country, idyllic and nostalgic ruins of the colonial era and the first republic coexist with the ruins of a social and political project that has come down. Hundreds of unfinished, disregarded, or momentaneously forgotten buildings exist. The encounter with these places evokes a rare sensation; they are not the ruins of a luminous past, but of a present of inability. We face an architecture that has never been completed, poor in its incompletion, proclaimed Ruin before its existence. It is a true image of a ruin by abandonment; I will call it ruins of future.

The series of photographs, drawings, and models that compose this proposal allow the continuity of construction of many of these abandoned sites. For this, I have taken part in the primary stage of which they departed and to which the architects reached (plan drawings, elevations, perspectives, structural and material descriptions, and in most cases, the incorporation of the first walls and levels constructed in these buildings). In some way of my objectives is to mediate between the school of thought of these architects and project designers and a new moment in the life of these spaces.

The intervention consists in bringing this undetermined and unfinished architecture to the stage of execution. Far from pretending to play with the beauty of the existent ruins and the glorification of an utopia, I take advantage of this unique opportunity that reality offers me: to have a starting point from which to "re-construct" an architecture, using my own point of imagination. In each project I not only try to debate a search of functionalities, but also to ponder on the inherent phenomena of the contemporary society: public and private as antagonists which define human relations, the loss of privacy, life within a possible society of control, teaching and distribution of wisdom and knowledge, solitude of human being...

Different from my other series of drawings which departed from the end of a specific story, of an architectural reality which in many cases was more than a century, these pieces arise from a zero degree of history, or more so from a rhetoric on the present moment. My project starts in the right moment where reality couldn't go farther, but stayed frozen. It seems that all had gone to lunch and had stayed in lethargy.

The fact from departing from this unfinished gesture, but at the same time from the plan of a building which has already been thought and calculated, with a thorough laying out, offer me the biggest risk and the biggest elements of the game. It is not only about the gambling incitation of the imagination, but of its implementation as real, as possible, with all the ethic implications it carries out.

Seldom has art counted with the absolute Emptiness and Fullness as in this case. Spaces without precise significance and history (or only the one given in the context and the possible inhabitants and neighbors of the building), but at the same time full of a concrete objective at the beginning and an immense desire: to exist, being inhabited. Remains in process of construction, foundations of abandoned buildings in their beginning, houses with all their windows promising a pleasant stay, large bulk of concrete erupting before the passersby as a monument to a glorious present. Most of these places today turned into inhabited groundplots, breath in the sensation of the no-site. These spaces deny their essence and hide the real objectives for which they were thought about. Their reality is the indetermination, their level of suggestions goes beyond what was imagined, also matches with surreality.

It is here where my architectural projects come to life. These unfinished spots have been invested of a form once and for all. They exist, and more than everything, pretend to demonstrate the triumph of the imaginative versus the real. In this sense, I try to prove how history, with the free will of certain policies, can be overcome or just put in evidence before the free and anarchic gesture of the artistic language.