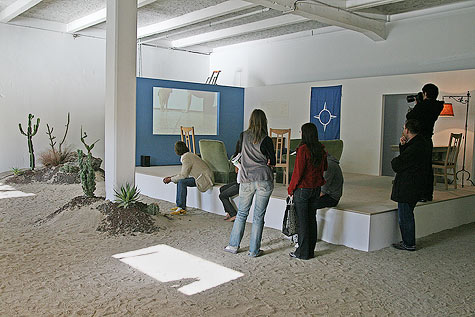 I Love Xijing - the daily life of Xijing President. 2009

The city of Xijing ("West Capital") does not yet exist on the maps, and yet it is the geographical pendant to Beijing ("North Capital"), Nanjing ("South Capital") and Tokyo ("East Capital"). For several years now the Xijing Men have been the embodiment, in every possible way, of a potential micro-nation that moves with the exhibitions they take part in – and which comprises three citizens from three nations long enmeshed in relationships of radical hostility. After their organisation of parallel Olympics in Beijing and the chance "discovery" of forged historical texts, the Xijing Men have "reconstructed" for the Biennale a model apartment – that of the president of Xijing Land – surrounded by sand and cactus. The Xijing flag and various videos bring the final touch to a project whose goal is the integration of Xijing as a city in its own right into the virtual world of Google and interactive maps.

Old sugar factory in the Confluence district, venue of the Biennale since 2003. The photo tour includes works by 35 artists and groups.