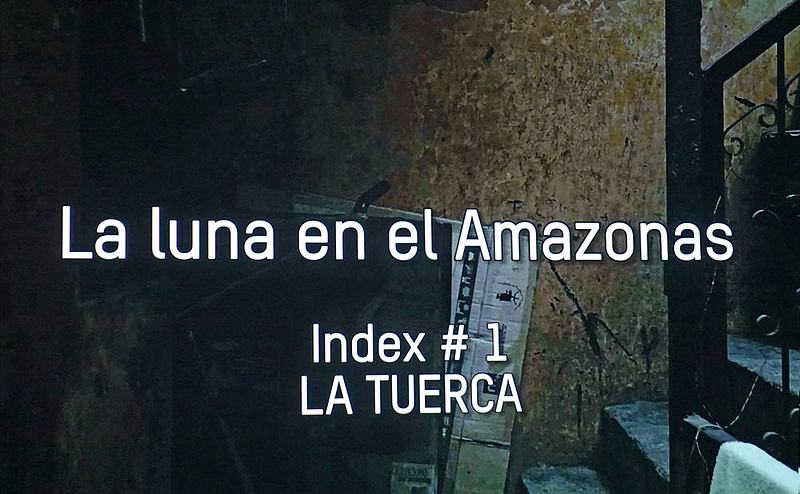 Mapa Teatro is an artists laboratory dedicated to trans-disciplinary creation. Founded in 1984 by Heidi, Elizabeth and Rolf Abderhalden. Based in Bogotá, Colombia.

The Moon is in the Amazon
Lecture performance, 28 September 2019, at the temporary space of the 11th Berlin Biennale at ExRotaprint in Berlin-Wedding

With the wind of imperialism in the sails, Europeans are emerging under the flag of science to survey all corners of the world. Expedition. Expansion. Ethnology. Inhabitants of the world are presumptuously identified, classified, cataloged. The white man subdues the planet, appropriates and exploits its resources. Ecology. Economy. Ecotrauma. The European expansionist urge is infinite, the resources of the earth are not. The world is not enough. In 1969 the Apollo 12 starts its flight, the next station is the universe; the next trophy is lunar. But the moon is in the Amazon. In times of colonial expansion and Western universalism, radical resistance means complete disappearance.

Drawing on evidence of the existence of an indigenous people whose survival depends on complete isolation from Western civilization, the theater collective Mapa Teatro creates a process of ethno-fiction. 18 heterogeneous clues will unfold over a one-year period, raising questions about visibility, vulnerability, and fiction from a postcolonial perspective. The first clue in the frame of the lecture performance The Moon is in the Amazon is based on the memories of a “Guaquero” [grave robber], who comes dangerously close to the isolated indigenous people with his raids on archaeological sites in search of marketable treasures. Tales of shamanists, explorers, and hunters of the region, rumors of neighboring tribes, and skull finds combined with forensic analysis are just a few of the clues that materialize the invisible in different formats. Piece by piece, Mapa Teatro invites you to explore blind spots of history. The 18 clues create a hologram that seems close enough to touch, yet disappears immediately on closer inspection.

exp. 1: The Bones of the World