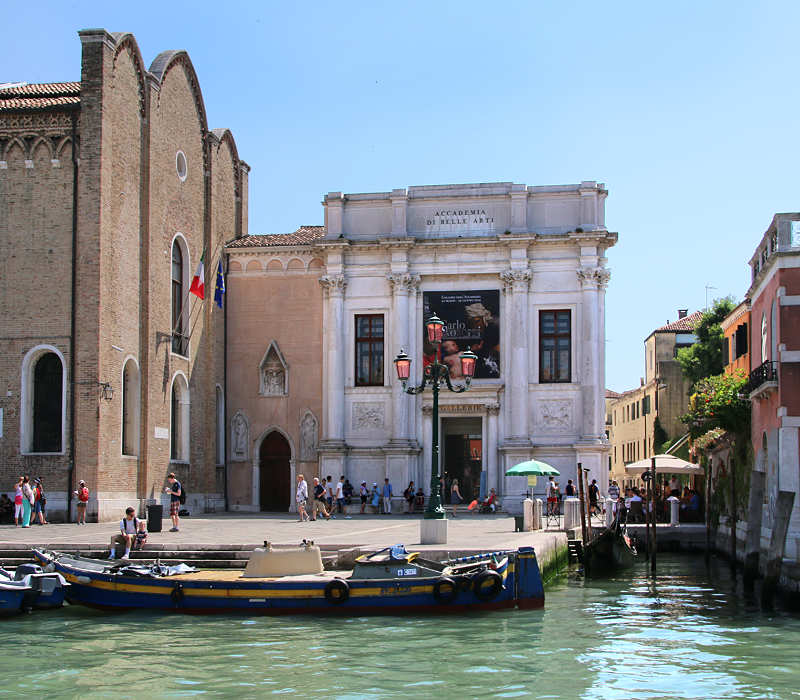 The Accademia Galleries is home of the world's largest collection of Venetian art from the 14th to the early 19th century. The most important museum of Venice is located in the Dorsoduro district in the historic complex of Santa Maria della Carità on the Grand Canal. This complex consists of three interconnected buildings: the former church, the monastery of the Canonici Lateranensi (Augustinian Canons of St. John Lateran), and the Scuola Grande, the seat of a lay brotherhood (more on the buildings below).

The itinerary through the 37 rooms and cabinets begins on the upper floor in the former chapter house of the Scuola Grande della Carità, whose richly decorated coffered ceiling from the 15th century has been preserved in its original state. In the 24 rooms on the upper floor and the 13 rooms on the first floor, one encounters numerous world-renowned masterpieces of art history, including The Tempest by Giorgione, Titian's Pietà, Carpaccio's series on the Legend of Saint Ursula, the Sacra Conversazione by Giovanni Bellini and The Feast in the House of Levi by Paolo Veronese, to mention just a few.

History of the Accademia

Architecture; exhibition halls and art works in the order of the recommended visit 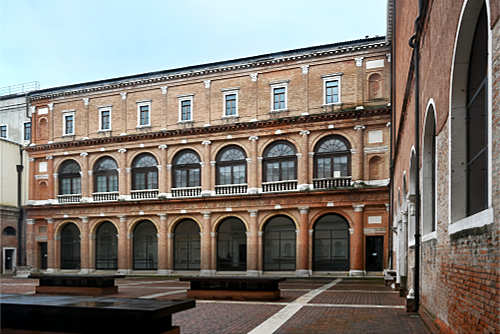 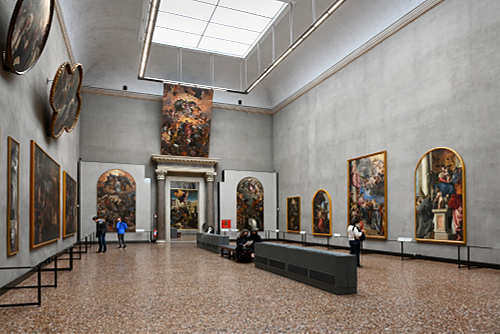 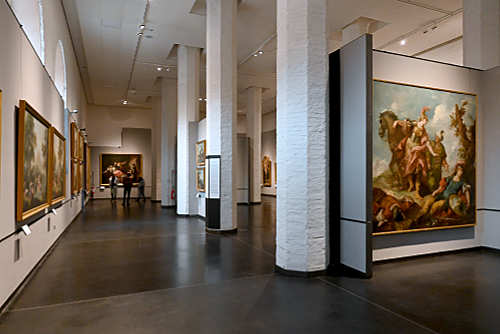 History of the Accademia

12th - 14th century
In the 12th century, an earlier wooden building on this site was replaced by stone buildings for the church and the convent. From 1344 on, the wealthy lay brotherhood of the Scuola Grande della Carità (founded in 1268, the first of the six scuole in Venice to receive the title of "Scuola Grande") had its headquarters on the property next to the Chiesa di Santa Maria della Carità.

15th century
Also thanks to the support of Pope Eugene IV (1431 - 1447), the son of a rich merchant in Venice, the income of the monastery increased so much that the buildings could be renewed and extended. In the mid-15th century, under the direction of Bartolomeo Bon, the church was rebuilt with brick in late Gothic style. On the side parallel to the Grand Canal a high bell tower was erected, which collapsed in 1744 and was not rebuilt again. The magnificent coffered ceiling with eight-winged angels in the chapter house of the Scuola Grande della Carità has been preserved until today. Marco Cozzi from Vicenza created it between 1461 and 1484. The tondi were added later.

1560s - Project by Andrea Palladio
Around 1560 Andrea Palladio (one of the most important architects of the Renaissance) was commissioned with a grand project for the monastery of the Canonici Lateranensi. The realization of this grandiose design, inspired by his study of ancient Roman houses, came to a halt as early as 1569 after the completion of the cloister and atrium. After a fire destroyed much of the Palladio building in 1630, its remains were incorporated into later alterations and additions. These include the oval staircase (scala ovata) of cantilevered marble slabs, which Goethe described in 1786 as "the most beautiful spiral staircase in the world," the sacristy designed as a "tablinum," and the great wall of the cloister with three orders one above the other.

18th century
Around 1760 the Scuola Grande della Carità was remodeled according to the designs of Giorgio Massari, executed by his student Bernardino Maccaruzzi. In the process, the magnificent grand staircase leading up to the chapter house was created.

1750 - First Academy of Arts
On 24 September 1750, the Venetian Senate founded the Veneta Accademia di Pittura, Scultura e Architettura (Venetian Academy of Painting, Sculpture and Architecture). It was based in the Fonteghetto della Farina, a warehouse for flour on the Grand Canal next to the Giardini Reali di Venezia near St. Mark's Square. From the beginning, the Academy was also responsible for the restoration and preservation of paintings in public ownership, which were to become part of the collection of the Gallerie dell'Accademia.

1797 - End of the Republic of Venice
Napoleonic and Austrian occupation
With the arrival of Napoleon's troops, the era of the Republic of Venice ended in May 1797. Between 1798 and 1805, France temporarily ceded Venice to Austria. After the incorporation of Venice into the Napoleonic Kingdom of Italy (1805 - 1814), countless works of art were confiscated from palaces and churches. Many of them were taken to Paris and Milan (capital of the Kingdom of Italy).
After the Congress of Vienna, Venice was again under Austrian rule from 1814/15 on, which ended in 1866 when Venice joined the Kingdom of Italy (newly founded in 1861).

1807 - The Accademia in Santa Maria della Carità
By a Napoleonic decree, the Veneta Accademia di Pittura, Scultura e Architettura, active since 1750 in the Fonteghetto della Farina, was transformed into the Accademia Reale di Belle Arti (Royal Academy of Fine Arts). As its new seat, the state authorities designated the secularized church and convent of Santa Maria della Carità and the Scuola Grande next to it.
The complex, already in decay, was renovated until 1811 under the direction of the architect Giannantonio Selva and adapted to its new purpose. Even after that, extensive alterations were made, such as in the church, where a false ceiling was inserted, making it possible to create rooms for the art school below and halls for exhibitions in the upper floor, lit by skylights.

Origin of the collection
For the training of its students, the Academy of Fine Arts assembled from the beginning a collection that initially consisted of some donations, practice works by students, paintings from the Scuola della Carità that remained on site, and a collection of plaster casts. In Napoleonic times, the Accademia was able to incorporate some of the works confiscated from secularized church property and palaces, thus saving them from sale or loss. After Napoleon was defeated, the collection was enriched by numerous paintings brought back to Venice from France.

In 1817, the Accademia Galleries were first opened to the public. In the course of the 19th century, various valuable donations from private ownership as well as purchases were added, constituting the world's largest collection of masterpieces of Venetian art.

After a long process of separation of the museum from the art school, the Gallerie dell'Accademia received the status of an independent institution in state ownership in 1882. Until then, the teachers and the management of the Art Academy were also responsible for the collection and its preservation.
In 1895, the director of the Gallerie dell'Accademia, Giulio Cantalamessa, began to radically restructure the exhibition and arrange it according to chronological principles.

Modernization in the 20th century
Immediately after the 2nd World War, the modernization continued according to the latest museographic criteria. Between 1945 and 1959, the famous Venetian architect Carlo Scarpa, under the direction of Vittorio Moschini, redesigned part of the interiors of the building complex.

In 2004, the Accademia di Belle Arti di Venezia (the Art School) left its historic location and moved to the restored former Ospedale degli Incurabili (Hospital for the Incurable) on the Fondamenta delle Zattere on the southern shore of Dorsoduro.

Thus, the entire complex of Santa Maria della Carità was now at the disposal of the Accademia Museum and had to be fundamentally restored and redesigned for this purpose. The designs were developed by Tobia Scarpa, the son of Carlo Scarpa. After years of work, the new premises were presented to the public in December 2013. The area for the Gallerie dell'Accademia museum doubled from 6,000 to 12,000 square meters and 30 new exhibition rooms were added. In addition, service areas for the public and space for reception and security staff were created on almost 1,200 square meters.

From Latin tabula, "board." In the ancient Roman house, a room adjoining the atrium, usually on the side opposite the entrance. The entire front opens to the atrium and could be screened with curtains or wooden doors. Often the back wall was also open or had large windows. Originally it was the master bedroom, but later became the main office and reception room of the master of the house.