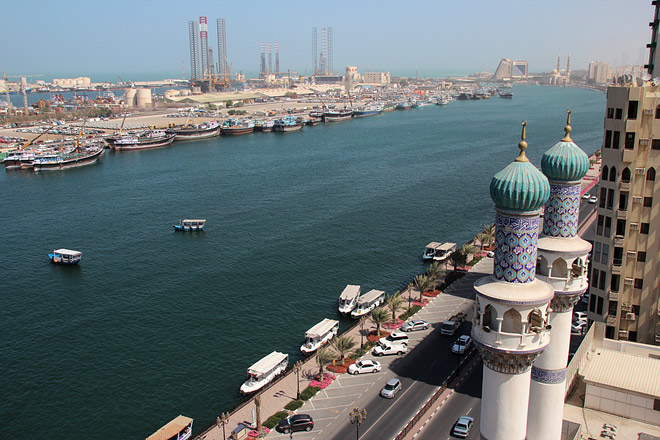 This tour takes you from the Radisson Blu Resort Sharjah and the Al Maghfirah Mosque near the entrance of the creek to Flag Island. The overall distance of the Sharjah Creek is aproximately 3,5 km, and the walkable distance on the promenade at Corniche Street all along the waterside, is currently ca. 2 km.

The Creek is the old lifeline of Sharjah, and the main reason for the first settlement. Within the sheltered creek, the early residents found safe anchorage and the presence of fresh water in trapped lenses close to the surface along shoreline.

A historical map from 1820 (see image 2), drawn by British Royal Navy surveyors, shows the town along the Sharjah Creek behind a fortified wall. A note states that "Fortified House Towers" have been "destroyed during the late Expedition".

At the beginning of the 20th century, Sharjah’s population was aproximately 15,000, and there were about 200 shops in the souk. Because of the lack of efficient administration, in that period the creek had silted up, affecting the size and number of vessels that could use the waterway. Much of the merchant trade relocated to Dubai, developing to become the principal port on the Trucial coast, at expense of Sharjah.

In 1970 a sandspit was breached to provide a direct entrance to the Khalid Lagoon, and the former Creek was allowed to further silt up, creating land for Corniche Road, which borders the Heritage and Arts areas. Under the direction of the Ruler of Sharjah, HH Sheikh Dr. Sultan Bin Mohammed Al Qasimi, up from 1974 began the development of the large Port Khalid, and subsequently the ruler instructed to recreate the old entrance from the the sea to the creek and the Souk Basin.

Until the end of March 2010, lots of timber dhows anchored at the quay along Corniche Street to unload and load their cargo. To have a working port in the middle of the city, especially immediately adjacent to the heart of the old center, was problematic, and the pollution from the dhows had deleterious effects on the water quality. This, combined with the need to better control imports and exports, resulted in the dhows being relocated to the other side of the creek, with ablutions and better customs control.

As part of the Heart of Sharjah Master Plan, the Corniche is being restructured to be more pedestrian-friendly, and extended into the creek to provide more space for boardwalk cafes and gardens, overlooking the busy waterway.

The lively abra traffic back and forth to Port Khalid and the Layah neighborhood still remains, which will increase with the future introduction of a public water transport system.

Recommended itineraries in Sharjah with information and photos of art venues and other places of interest.