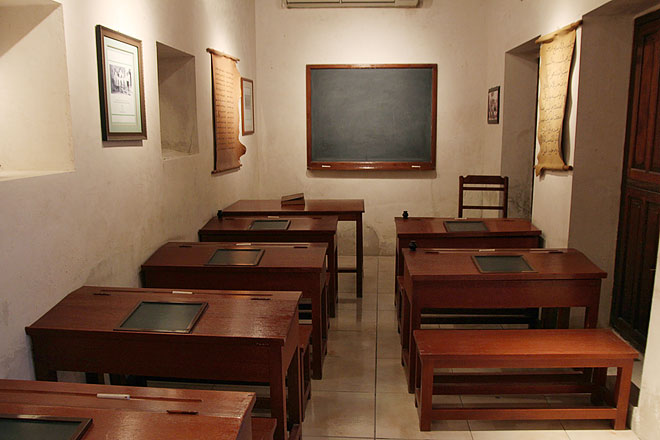 Starting as Al Taimiyyah Al Mahmoudia, the first formal educational institute in the emirate of Sharjah was initially set up in 1935 in a village in the Al Heera district before it moved to the house which today is the museum. In that time, the usual way of teaching was that small groups of children received traditional Islamic lessons at the home of a religious scholar.

Known later as Al Eslah School, meaning a school of reformation, it was founded by Sheikh Mohammad bin Ali al Mahmood, a religious and intellectual pioneer who was also its principal until 1948. Teachers from other Arab states were brought in to broaden the school's curriculum beyond religion to include mathematics, history, geography, astronomy, literature, even some English classes. In the early 1950s, Al Eslah was one of the first schools in the region to educate girls.

In the 1940s the school was renamed Al Eslah Al Qasimia, in recognition of Sheikh Sultan bin Saqr Al Qasimi, Ruler of Sharjah at the time, who took it over financially after the recession that hit the area with the collapse of the pearl trade.

The most prominent among Al Eslah’s students is His Highness Dr Sheikh Sultan bin Mohammed Al Qasimi, Member of the Supreme Council and Ruler of Sharjah.

The school in this place was abandoned in the 1950s as larger educational institutes were opened in other areas. In the 1990s it was restored and turned into a museum.

From information found in:
Ruler who's one of the old school,
by Rym Ghazal, The National, 15 Sep. 2010

About Sharjah: The school of memories,
by Lily B. Libo-on, Khaleej Times, 7 April 2012