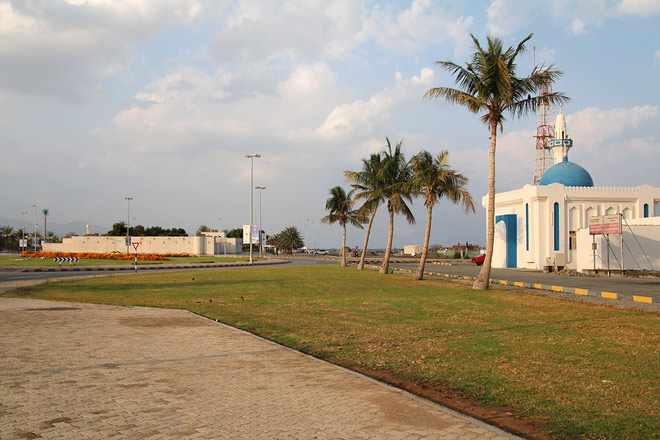 The most southernly of the three exclaves of the Emirate of Sharjah at the East Coast of the UAE consists of two parts: Kalba and Khor Kalba (Kalba Creek); both together with an extension of almost 10 km, and with a beautiful seaside and wide beaches on a length of 7 km at the Gulf of Oman. To the west and southwest of Kalba rise the Al Hajar Mountains.

Between the fort and the beach there is the Bait Sheikh Saeed bin Mohammed Al Qasimi, built 1898-1901 as the residence of the wali of Kalba. In December 1999, the house has been opened as a museum. Its heritage collections include the Sheikh Saeed’s room, a children’s room, a living room for children, a room for agriculture, a room designated for old pictures and mementos to a sitting room and a kitchen. One area is dedicated to archeological findings discovered in the Eastern Region of the Emirate of Sharjah.

Khor Kalba (Kalba Creek) adjoins to the south to the Sultanate of Oman. It is the site of Arabia's oldest mangrove forest and a crucial conservation area for endangered species, including rare birds. The waters are also an important feeding ground for turtles who swim right up the creek and can often be seen from the banks. This ecosystem can be visited by guided kayak tours. Right beside the nature reserve, at the Creek, there is a former ice factory that after reconstruction
will be used by the Sharjah Art Foundation for the production and presentation of art works.
At the northern entrance of Khor Kalba, close to the beach, there are the ruins of an old village. The traditional houses, mosques and a fort are currently being reconstructed to be opened in some moment as a heritage village.

Already restored is the Al Ghail Fort in the southwestern part of Khor Kalba, standing on a rocky outcrop at the entrance to a wadi taking the new road to Wadi Helo. It has been built by order of Sheikh Saeed bin Hamad Al Qasimi and is named after a falaj (traditional irrigation system) which ran alongside.