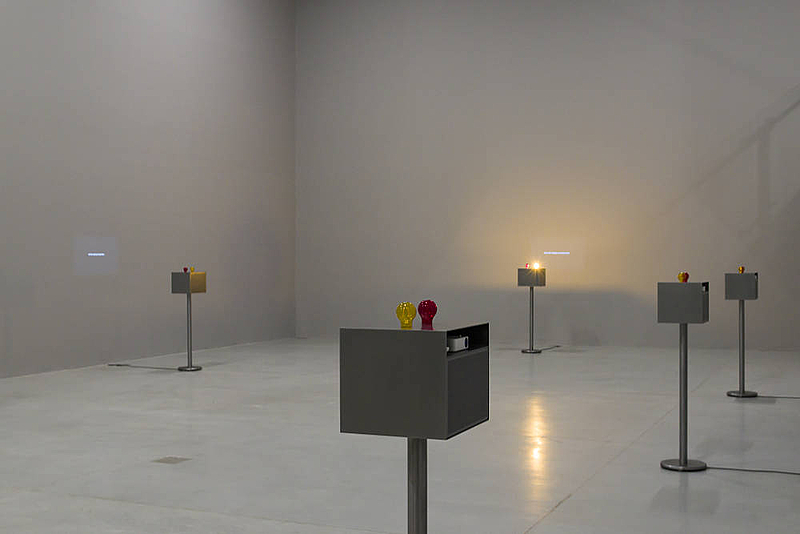 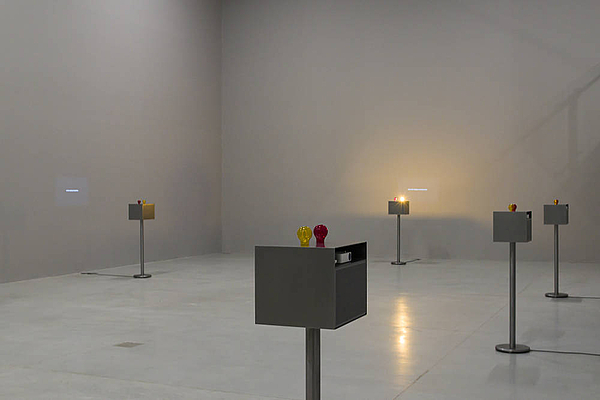 The Witness-Machine Complex examines the role of translators during the Nuremberg trials in 1945–1946. These trials marked the first ever use of a system for simultaneous translation. The newly developed electronic audio technology enabled the live translation of the trial proceedings into Russian, French, German and English. Even though the translators’ work was of great importance to the procedure, there are no recordings of them in the act of translation. The only indication of their presence in the film footage of the trial is marked by the flashing yellow and red lights built into the witness stand and the prosecutor’s podium. These lights were used to slow down or pause the speed of the speech flowing into their headphones.

The artist has collected seven of these moments. In one example, a light flashes red to signal the order to repeat, derailing a witness’s train of thought and causing a minute of silence, during which agents of the court plead and prompt the witness’s speech to return, to no avail. In another, Nazi industrialist Walther Funk accelerates his speech and raises his voice in defiance while the translator jumps the light switch in contestation. When Marie Claude Vaillant Couturier, a member of the French Resistance who was interred at Auschwitz for three years, is interrupted by the flashing light, she begins to speak in a slow staccato in which each syllable is overemphasised; her robotic performance, combined with the violence she describes, sounds dissonant and yet is perfectly tuned to the machine of justice.

The Witness-Machine Complex reanimates the way in which these lights flashed in the original trial. The lights symbolise the kind of obstacles that need to be traversed in order to translate an experience into a testimony. This sound and light installation is a device to tell a history of the trials’ exclusively through their interruptions—the same interruptions which have been removed from the official trial transcript. In doing so, the artist seeks to reconnect with the sonic substance of the trial. The work attempts to hear these witnesses of the Holocaust not only in relation to what they said but what it took for them to become witnesses.