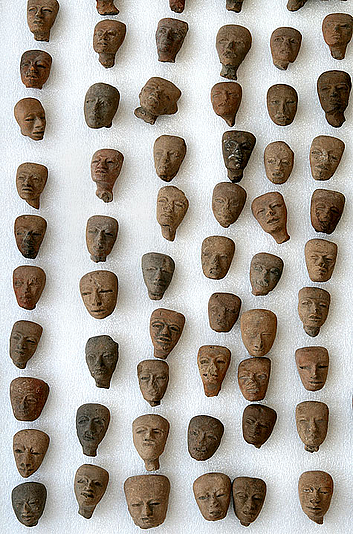 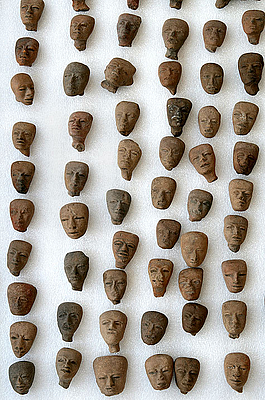 Teotihuacan, 0 - 650 A.D.
Height: 3-4 cm; width: 2-2,5 cm
National Museums in Berlin, Ethnological Museum
Thousands of small heads produced with the aid of molds were found and collected in Teotihuacan, while the broken, fragile, and unadorned bodies and limbs long went unnoted as such in the surface surveys.

The Berlin Mexican Studies scholar Eduard Seler wrote on this: "…the number already found and which continues to be found is beyond calculation; There is no traveller visiting the pyramids, or passing through the railroad running near Teotihuacan, but carries up to ten thousand of these little heads for the foreign museums."
(Penafiel, Antonio. Teotihuacán: Estudio histórico y arqueológico [2 vols]. Oficina Tipográfica de la Secretaría de Fomento. México:1900:51).
Most of the small heads depict the typical "Teotihuacan face". They display a spectrum of variations, but which overall show great uniformity – since they were taken from molds.