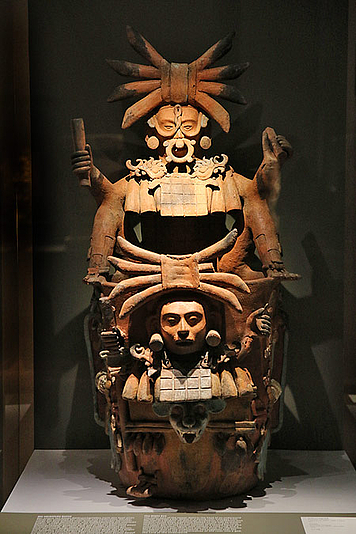 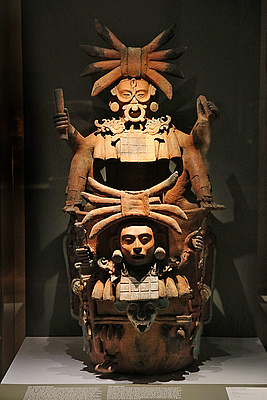 Censer
Late Classic (660 - 900 AD)
Comitán, Chiapas
Clay
INAH. Museo Regional de Chiapas, Tuxtla Gutiérrez, Chiapas
The lower part of the censer depicts the head of an underworld animal, perhaps a bat. Above it, a young ruler emerges from the jaws of a serpent. He wears ear ornaments, a headdress with several curved pikes, a pectoral flanked on the side by jawless serpent heads, and holds a ceremonial scepter in each hand. The upper part of the censer consists of a seated figure who resembles the lower figure, with sandals, a nose ring, and a band around his eyes that curls over the brow. He represents the Jaguar God of the Underworld. This suggests that the sculpture depicts the transformation of the ruler into a god, the Lord of the Underworld.