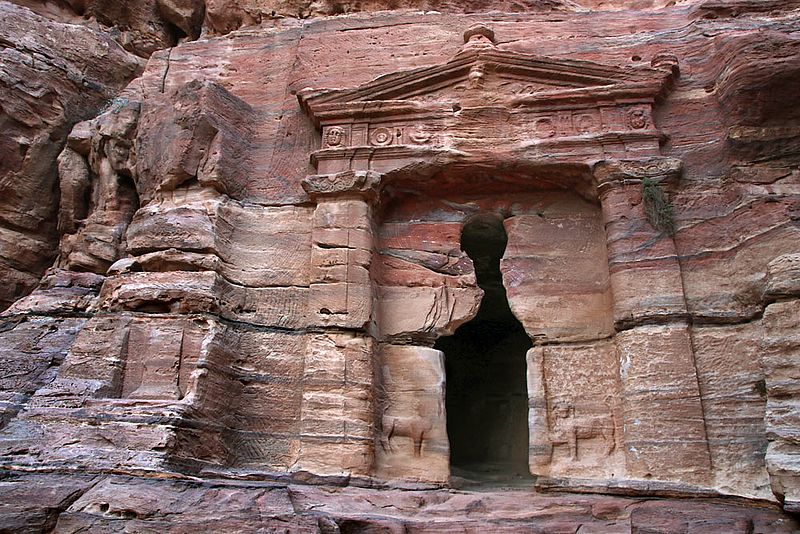 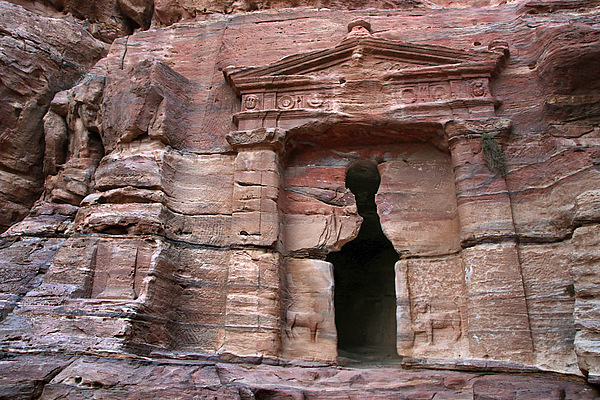 The Lion Triclinium (BD 452) was created around the middle of the 1st century AD, probably in connection with the necropolis on the rock terrace to the left of it. In the building itself there were no graves, it was intended for ritual banquets in honour of ancestors or deities.

The name comes from the two, now strongly weathered lions on both sides of the entrance door. The keyhole-like, high door opening was the result of the erosion of a round window in the upper area. The pilasters on both sides are completed by Nabataean capitals with floral ornamentation.

Remarkable are the women's heads on the outer fields of the triglyph metope frieze. At the beginning of the 20th century, Gustaf Dalman wrote that they were Medusa heads (Dalman, p. 247), which has been repeated by many authors, without there being any factual evidence. Dalman also believed to recognize a polyp in the weathered tympanum relief, which is equally unfounded. Rather, it is the motif of the "Rankenfrau" (vine woman) that, according to Robert Wenning, also appears in Petra in the pediment of the Khazne (Treasury) and the tomb of Sextius Florentinus.

Of the three urns on the top and the corners of the pediment, the left one is missing.

The large betyl on the left embodies the presence of the Divine. What now looks like an altar was once a niche, but its upper edge has disappeared due to erosion.

Several details on the next page

The ancient processional route up to one of Petra's most attractive landmarks, the so called Monastery, offers magnificent views of the scenery and many archaeological remains along the way.