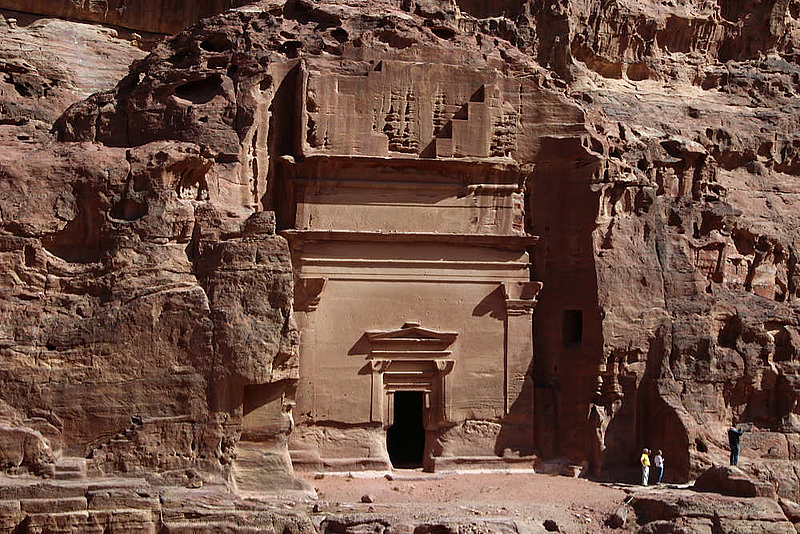 At the end of the Street of Facades, in the upper row of the western Jabal al-Khubtha slope is the famous Tomb BD 813, called Uneishu, due to an inscription on a grave slab that stated: "Uneishu, brother of Shuqailat, son of …" (more about, see below)

The tomb (20 m height and 12 m width) with facade decoration of the Hegra type consists of a principal order (entablature, a plain attic with mouldings crowned by two large half merlons) which is supported by two pilasters with Nabataean capitals.

The door, reached by three steps and flanked by two very narrow pillars supporting an entablature, is optically enlarged by a second frame of pilasters with engaged quarter columns and triangular pediment, where three acroterion bases can still be seen.

The almost square funeral chamber (7,90 by 7,60 m) has three loculi in the back wall and four loculi in each of the side walls. Another loculus can be seen on the exterior right wall carved very high.

The forecourt was framed by two porticoes, on the right side carved into the rock with four columns, on the left side bricked up with three columns.

To the left is a rock-cut triclinium (approx. 10 x 9 m), with a water basin next to the entrance. Its rear wall is carved with three loculi for burial.

The tomb could be reached from the street through a large stairway, partly hewn out of the rock and partly built with dressed stones, starting near Tomb 824.

In the sloping southwest corner of the square there are remains of a pyramidal stele, perhaps a nefesh.

Although the inscribed slab (0,78 x 0,48 m) was found in the neighbour Tomb 808 by Gray Hill at the end of the 19th century, then recorded by other archaeologists, and later lost, Fawzy Zayadine considered that the inscription must have been found in Tomb 813, since the other one has no graves covered with slabs. He could prove this in an excavation of Tomb 813 in 1973, where together with Dr. Manfred Lindner, he found a plaster fragment with part of an inscription which could be restored to read “Shuqailat" as well. From the inscriptions, Zayadine dates Tomb 813 to the second half of the first century AD. Uneishu was probably the minister (for this reason called "brother") of Šaqilat II. (or Šuqailat) who ruled the Nabataean Kingdom from 70/71 to 76 AD, as regent of her son Rabbel II.

A triclinium is a dining room widely used in Antiquity with three benches (or sofas) on which the guests reclined while feasting. In Petra, more than a hundred such triclinia of various sizes have been found, about a quarter of them in connection with tombs for ritual banquets in honour of the deceased.

A biclinium is such a room with two benches.