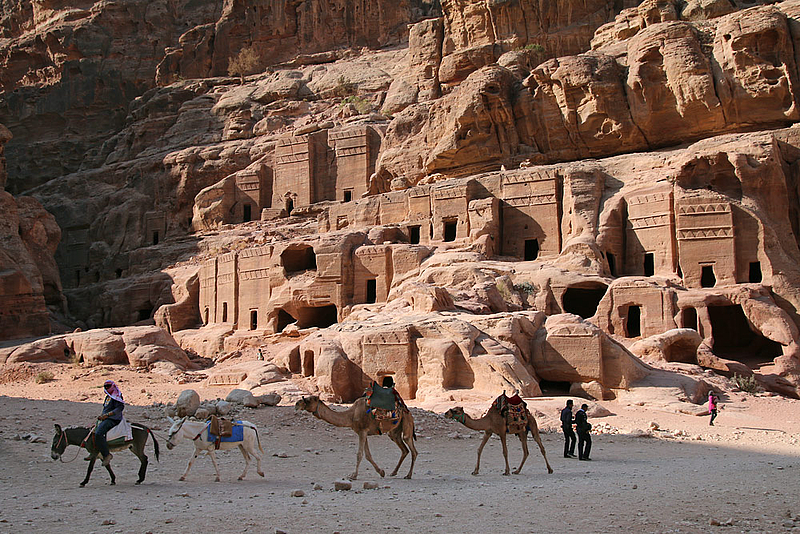 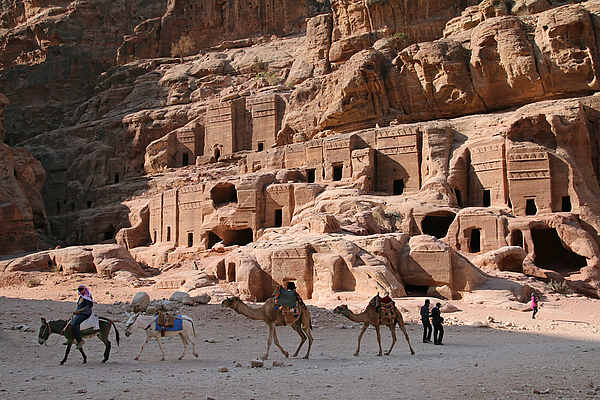 Shortly before the theatre, smaller tomb facades have been carved out of the northeast face of the Jabal Al-Madhbah (also called Zibb Atuf) in several rows one above the other. It was assumed to be the oldest necropolis of Petra. This was at a time when the chronology of Brünnow & von Domaszewski (published in 1904) had not yet been refuted, according to which there was supposed to have been a linear development of facades from simple to more complex forms. However, the extremely elaborate mausoleum of Al-Khazneh, inspired by Alexandrian models, was probably built relatively early (3rd/4th decade A.D. - see our chapter on this subject), and the Pylon and Step Tombs were simplified and standardized in the course of the 1st century AD, when more and more Nabataeans became wealthier thanks to trade, and had their tombs built in the city as well. (L. Wadeson).

In the theatre necropolis, Double Pylon Tombs with single and double crenellations predominate. Most of them have a groove above the entrance, into which a cornice was inserted. There are also some Step Tombs and simplified Hegra facades as well as some smaller Arch Tombs.

When the theatre was enlarged after the Roman annexation of the Nabataean Kingdom in 106 AD, some of the rock facades were knocked down to enlarge the auditorium (see Petra Theater). But the necropolis itself was not abandoned at this time.

Details on the next page.
See also Typology of Tomb Facades

Frieze with a row of crowsteps (stepped merlons) over a relief moulding, and sometimes another narrow, plain frieze.

Two sets of steps facing each other, over a cavetto (concave moulding) cornice, and fascia (horizontal, threefold mouldings, projecting from bottom to top).

Two friezes of crowsteps with relief mouldings above and below.