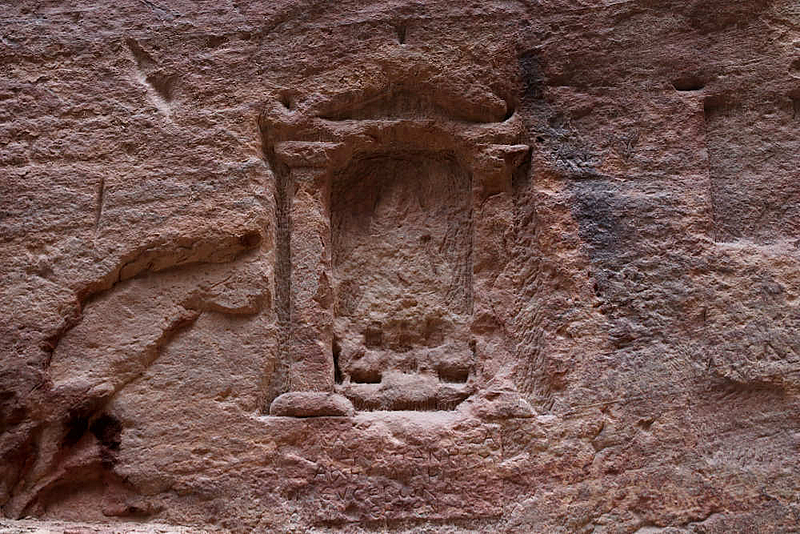 In the sliding images above you can see details of the votive niches, starting with that of Sabinos Alexandros:

The aedicula D 149 (116 cm high) consists of two pilasters, an architrave with upwardly drawn corners and a triangular pediment. In the niche stands a strongly destroyed figure with knee-length garment in front of two animals lying on the floor. From the context, experts conclude that it could be the goddess Allat with two lions. This goddess was especially worshipped in the Haurān, where the donor came from.
In the Greek inscription on the tabula ansata under the aedicula, the name of the donor is mentioned (with spelling mistakes): "Sabeinos Alesandros, Panegyriarch of Adraa, in piety dedicated."

The hemispherical omphalos-betyl in an arch niche to the right of this aedicula does not belong to the Nabataean types, but comes from Phoenician-Syrian traditions. On coins of the city of Adraa from 174 and 177 AD a similar betyl appears together with the inscription: "Dusares theos Adraenon" (Dusares God of Adraa).
The dedication under the niche is hardly legible. According to earlier researchers, it read: "Panilaaros, son of Piasaos, Panegyriarch of Adraa" (after Brünnow & Domaszewski).

More about Sabinos Alexandros Station and the panegyriarches (cult officials for the festivals) on the previous photo page. 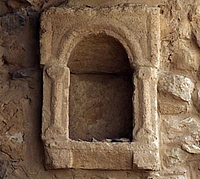 Rectangular tablet for inscriptions with "handles" in the form of triangles or "dovetails".