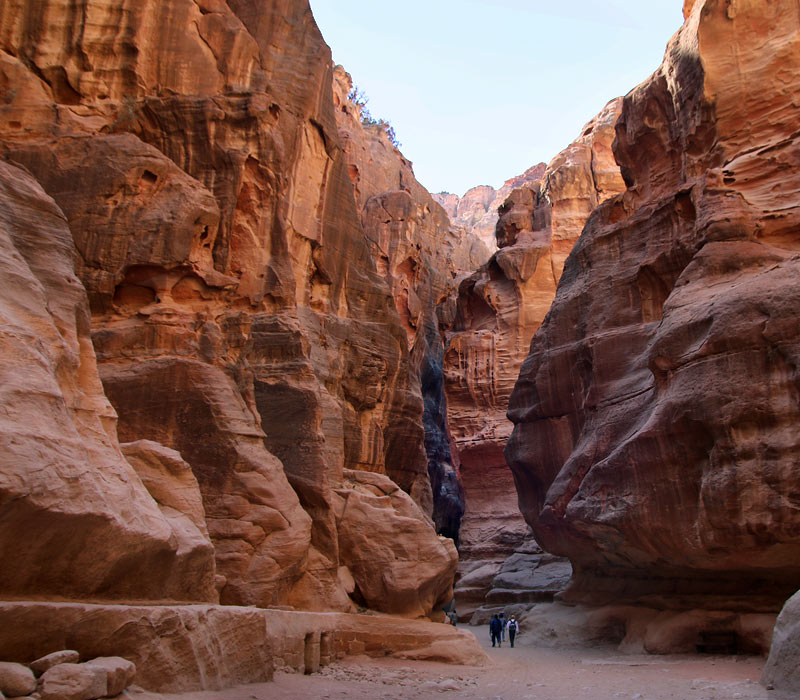 From all cardinal directions there were routes leading to the former Nabataean metropolis, but the main access was this eastern pathway through the Siq (Arabic as-Sīq = the shaft). It winds over 1.2 km through a cleft in the sandstone massif, which in some places is only 3 m wide and up to 70 m deep. Wadi Musa’s streambed once ran through, until it was diverted by the Nabataeans to protect the Siq from flash floods (see below). In the last section, between the narrow cliffs, promisingly starts to appear the Al-Khazneh (Treasury) - the most famous attraction of Petra.

Apart from the impressive rocky landscape, the Siq also contains numerous testimonies to the religion and technical skills of the Nabataeans. These include the many votive niches and idols, called betyls, and small incense altars. On both sides of the path you can see the remains of terracotta pipes and a rock-cut cannel through which drinking water was carried into the city. Nabataean retention dams in five side gorges of the Siq have been rebuilt and reinforced. Parts of the ancient pavement have also been restored. More about this in our informative photo tour.

When a severe flash flood swept through the Siq around the middle of the 1st century BC, it destroyed the first water pipeline, the gravel road and probably also buildings in the city area. The Nabataeans subsequently constructed a complex protective system, which was an essential prerequisite for further construction work in Petra. The entrance to the Siq was sealed off by a 12.80 m high dam. In the ravine to the right of it, an almost 90 m long tunnel was cut through the rock to divert the water through the Wadi Muthlim and the Wadi Mataha to the north around the massif of Jabal al-Khubtha. On this detour the water returned to the original streambed of the Wadi Musa in the centre of Petra.

To protect against torrents from five side valleys of the Siq, these were sealed off by retention dams. On the cliff edge of the Jabal al-Khubtha, which runs north over the Siq up to 70 m high, a series of dams held back the water. They were connected by stepped paths carved into the rock.

On both sides of the path through the Siq, the remains of once kilometre-long water conduits can be seen. They were built together with the protection system against flash floods and the paved road in the last decades of the 1st century BC.

On the rock faces on either side of the Siq, around 70 votive niches carved into the rock were registered (PNP) in which betyls appear, or which are empty so that transportable betyls could be temporarily placed in them. The shapes of the niches range from simple rectangular recesses to arched niches and temple-like designs with pilasters, capitals, cornices and pediments (like the aedicula D 144).

A betyl (Semitic: bait-el = house of God; Greek: baitylos) is an aniconical God symbol, usually in the form of a vertical rectangular plate or stele. It can also be a negative form in a niche. Often there are several betyls in a niche next to each other, on top of each other or grouped together. "The betyl is not a representation of the God, neither an image of the God, nor an idol. As a medium of the presence of the God, however, it can also experience cultic veneration. This in turn means that in the act of worship, one could offer sacrifices and gifts to the betyl." (Wenning, 2007)

Not to be missed in the Siq is the shrine in a boulder in the centre of a larger worship site with drip sanctuary and cisterns. It displays the only eye betyl in the Siq, a special type of these god symbols.

Another highlight is the so-called Sabinos Alexandros Station, a row of votive niches. Some of them bear inscriptions in Greek, so that the donors, coming from what is now southwest Syria could be identified. The niches were carved in the 2nd/3rd century AD, that is after the end of the Nabataean Kingdom (106 AD). 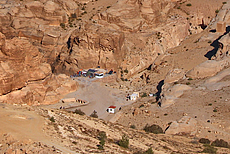 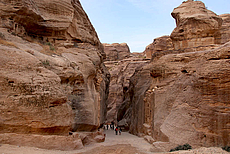 Arch at the entrance 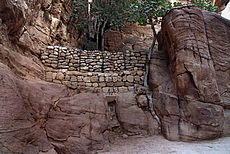 Dams in side gorges 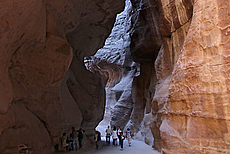 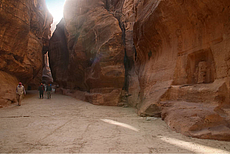 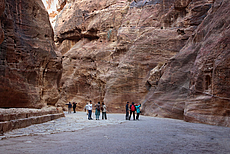 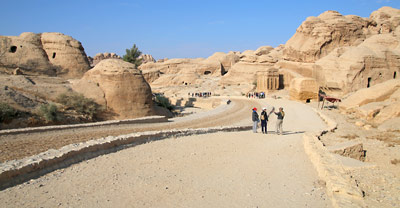 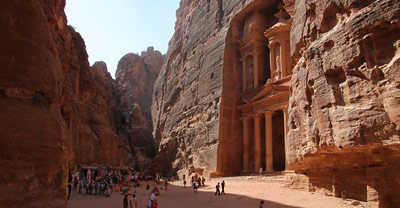 Systematic documentation and analysis of the votive niches and betyls in Petra. Research project directed by Prof. Dr. Robert Wenning at the University of Münster, Germany, started in 1995.
Information (in German)