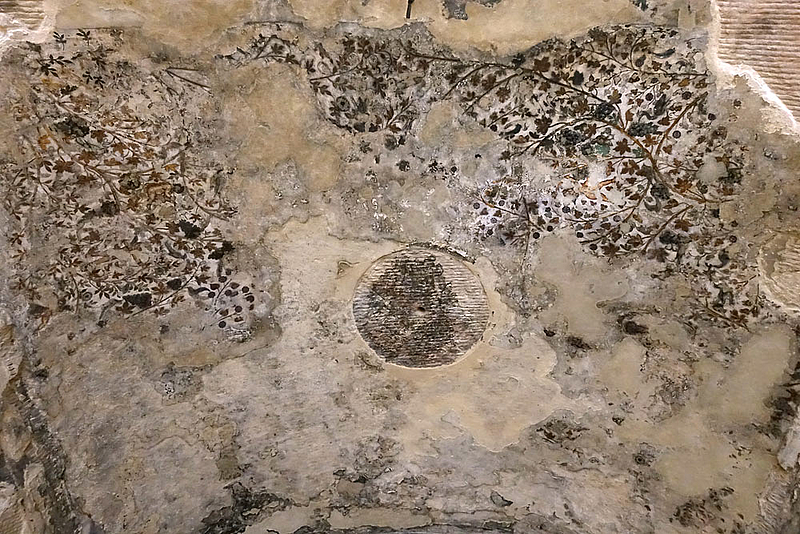 Ceiling painting at the Biclinium

The painted ceiling remains in the arched recess of a chamber at Siq al-Barid are of immense historical meaning, since - according to the Petra National Trust - they configure the most important and largest example of Nabataean mural painting that has survived in situ, providing also invaluable information about the history of the region.

The style of the paintings is characterized as Hellenistic Alexandrian. A recent radiocarbon analysis by specialists from the Yarmouk University (Irbid, Jordan) dates their origin to the period between 40 BC and 25 AD.

As reported by the Gerda Henkel Foundation, which sponsored the restoration, the scientific investigation in connection with the 2006 - 2010 restoration revealed that lead white, Egyptian blue, copper green, coloured minerals and organic dyes were applied to a gypsum-like substrate. Gilding could be proven on individual vine leaves.

The mural depicts a web of intertwined grape and ivy vines, small Cupids (including a flute player and an archer), birds, insects, flowers, fruits, etc., all of which suggests a cult of Dionysus, for whom this place apparently was dedicated to.

Deep canyon with remarkable rock-cut buildings and unique murals, which was part of an important Nabataean trading base, 6 km north of the centre of Petra.