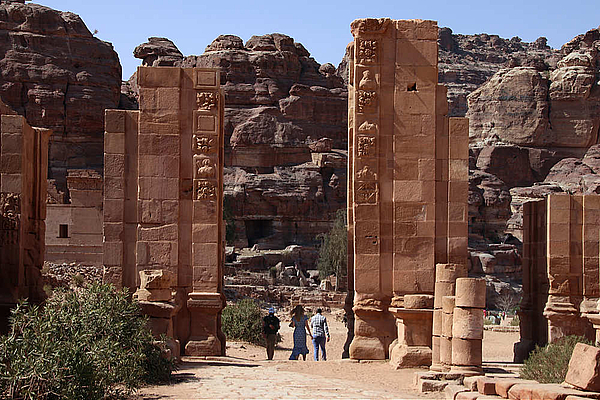 After the annexation of the Nabataean Kingdom by Rome in 106 AD, a new construction boom began in Petra, by then capital of the Roman province of Arabia. In the process, the east-west axis along the Wadi Musa was developed into an elegant Colonnaded Street with many private stores and shops, and public services in the colonnades.

As a special highlight and demarcation between the profane area and the extended sacred precinct (temenos) of the Qasr al-Bint, a gate was erected at the western end of the colonnaded street. It was probably built during the reign of the Roman emperors Trajan or Hadrian (around the 2nd to 4th decades AD).

The 17 m wide Temenos Gate originally had arches over the three passages, supported by four pillars standing on moulded pedestals. The gate could be closed with wooden doors. Shallow niches cut out on the inner sides of the pillars were meant for the open door leaves.

On the east side, some of the figurative decoration has been preserved on the inner pilasters of the higher central passageway. On each side, seven panels one above the other were carved as reliefs from the massive stones. Floral and geometric motifs alternate with figural busts of deities.