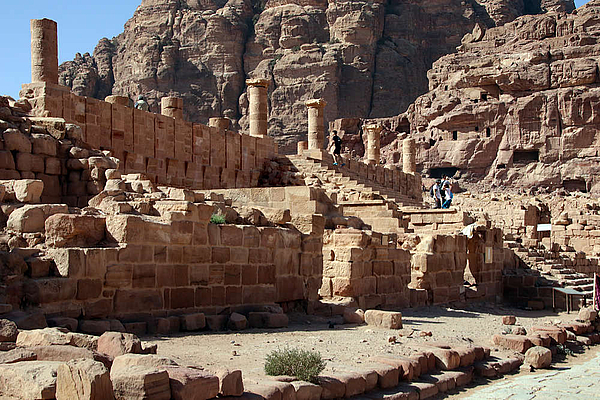 next
prev
more
Western part of the Propylaeum, divided by a wall into two galleries. The southern (left) one was vaulted. In the northern one were found arrowheads, cheek flaps of helmets and 417 spherical projectiles from around 106 AD - next photo.
© Foto: Haupt & Binder, Universes in Universe
more
In the 'Great Temple' 423 such ballista (spherical projectiles) were found, 417 of them in the northern gallery of the Western Propylaeum.
© Foto: Haupt & Binder, Universes in Universe

The once high outer walls of the 55 m wide gateway (propylaeum) configured the facade of the building complex and shielded it from the public area of Colonnaded Street. Through a portal in the middle of the wall, the main limestone staircase led up to the large colonnaded courtyard (lower temenos).

In the eastern part of the Propylaeum (in the foreground), doors led from the street to two isolated interior rooms and to a corridor with two other rooms on the eastern side (far left).

The western part of the 12.5 m deep Propylaeum (second photo above) consists of two parallel galleries separated by a wall, the southern one of which was vaulted. One entered the western Propylaeum through a door at the western staircase. Next to it there is a niche with two identical aniconic betyles made of limestone and a bench underneath for offerings.

In the northern wing of the Western Propylaeum, the archaeologists came across 417 spherical projectiles made of stone (ballista - 3rd photo above) as well as numerous arrowheads and cheek flaps of helmets. They may have been deposited there as a weapons cache during the time of the Roman annexation of the Nabataean Empire in 106 AD. Archaeological evidence of impact of the bullets into the walls of the Propylaeum during a possible attack was not found, but it cannot be ruled out. After the earthquake of 113/114 AD, a tiled floor was laid in the northern gallery with the ballista as fill material.