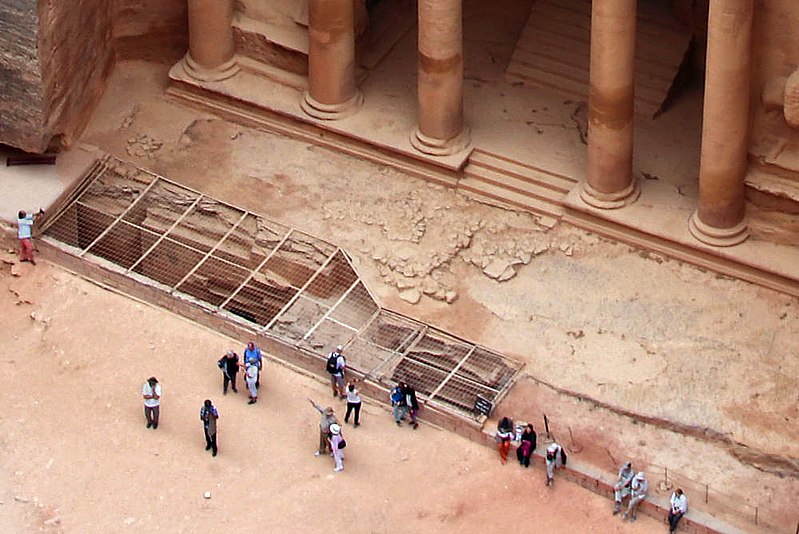 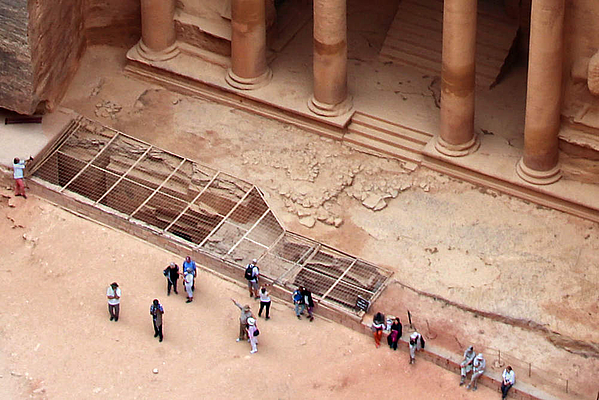 When the number of visitors dropped sharply in 2003 due to the war in Iraq, the opportunity was taken to carry out a major archaeological excavation in the otherwise overcrowded forecourt. The older graves below the Khazneh were uncovered as far as possible. One could be dated 25/20 to 10 BC on the basis of ceramic sherds. Probably four of the five graves were of the Hegra type, i.e. step tombs with a high facade and large half merlons. When the Khazneh was built later, the upper parts of the older facade tombs had to be knocked down. Some remained in use. (see also the drawings on the previous image page)

Since the Khazneh is numbered BD 62, the five lower graves were given the numbers 62A to 62E. The oldest is 62A.

The second photo above shows the so-called Step Tomb 62E of the type Hegra, whose remaining facade is about 6 m wide and 7 m high. From the plaza 11 steps lead down to the entrance 5 m below. There are indications that the stairs and the facade were hidden under one roof after the construction of the Khazneh so that they did not disturb the design of the large tomb and the plaza.

The staggered entrance is framed by two pilasters with quarter columns and Nabataean horn capitals on a fluted frieze. The capitals are cut off at the top, and under each "horn" there is a "tongue". During the construction of the Khazneh, the triangular pediment was partially demolished and, together with other fragments of the facade, was used as filling material under the stairs and on the forecourt.

The chamber in this tomb is unfinished. Through a side door in the interior one could enter tomb 62D, which had been built a little earlier on the right side, but whose entrance was closed by the monumental staircase in front of Al-Khazneh.