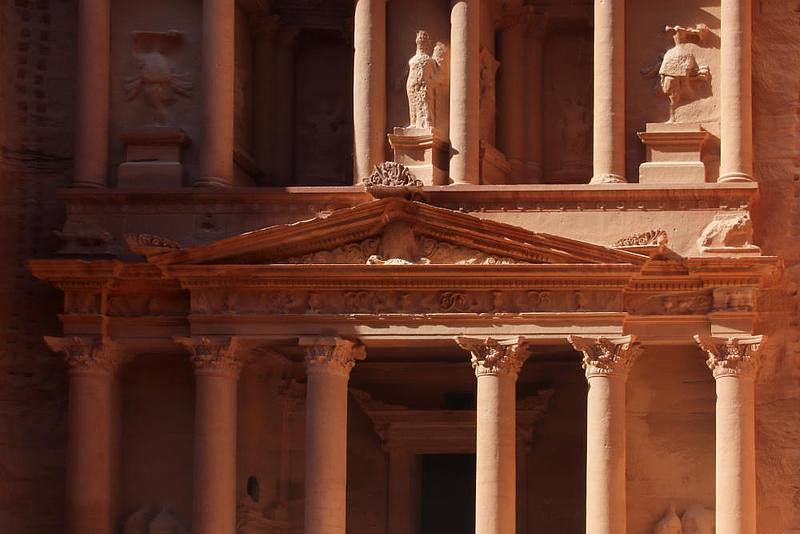 The architrave is set back between the two outer columns. The first staggered "beam" is finished at the top by a narrow convex and a wider concave moulding (cavetto). In the relief frieze above, pairs of winged animals, probably made unrecognizable by iconoclasts, turn towards drinking vessels (kantharoi). Their tails interlock and become tendrils with large flowers at the end. There are still traces of painting on the vessels.

The felines on the outer sides of the attic were also iconoclastically mutilated. They could have been winged lions (sphinxes?) in the sense of guardians of the tomb and to ward off evil. Thirty-two rosettes adorn the upper edge of the attic.

In the middle of the tympanum relief, the remains of a head are visible, from which floral motifs emerge and spread to the corners. This motif of a vegetation goddess, also appears in Petra on the tomb of Sextius Florentinus. A beautiful, well preserved example of the Nabataean temple Khirbet et-Tannur (1st half of 2nd century AD) is exhibited in the Jordan Museum in Amman (see our photo page with explanations).

On the central acroterion above the apex of the pediment, a basileion is depicted, an Isis emblem supplemented here by some attributes. More about this on the following photo page.