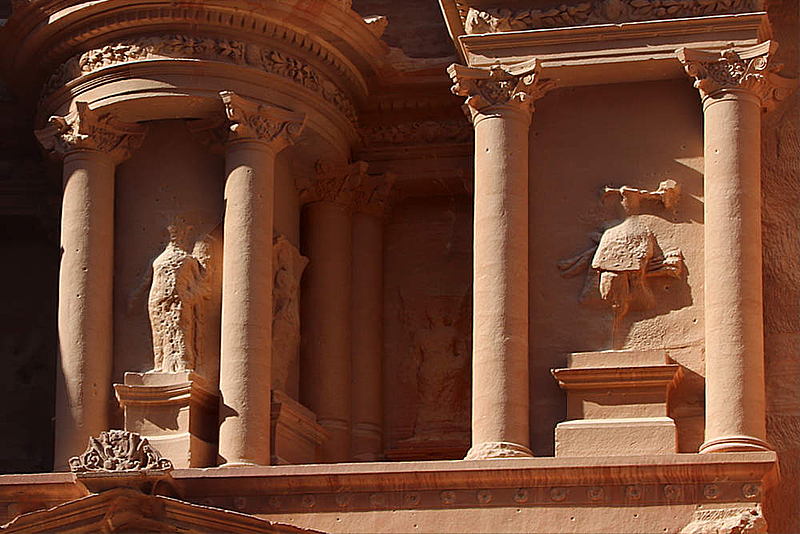 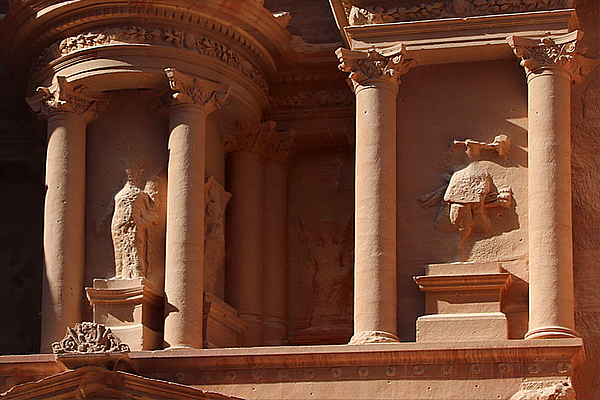 The main figure of the facade is identified as Isis by the basileion (Isis emblem, see the detail) on the central acroterion of the pediment. Details are hardly recognizable nowadays, therefore old photographs and drawings are used in research. On her head she is said to have carried a kalathos (lily-shaped work basket), in her left arm a cornucopia and in her hanging right hand a situla (conical vessel made of metal) or a bundle of ears. She is clothed in a peplos (long heavy garment) and a cloak that rests on her hips. (R. Wenning. See also: Iconographical program, Al-Khazneh start page)

All relief figures of the upper order are placed like statues on pedestals. These are the oldest preserved sculptures in Petra.

Between the outer pairs of columns on the front side and on the four side walls of the two niches there are dancing Amazons with weapons (probably battle axes) swinging above their heads. The right front one holds a long shield with cut off ends in the other hand. "These mythical female warriors often appear on reliefs on Greek and Roman mausoleums or sarcophagi and symbolize the human fight against death". (F. Zayadine, p. 44) "The weapon dance of the Amazons might reflect a custom at funeral ceremonies of the noble families." (R. Wenning, p. 154)

At the backs of the two niches are two Nikes (winged goddesses of victory) with long robes. At ancient tombs they symbolize divine support.