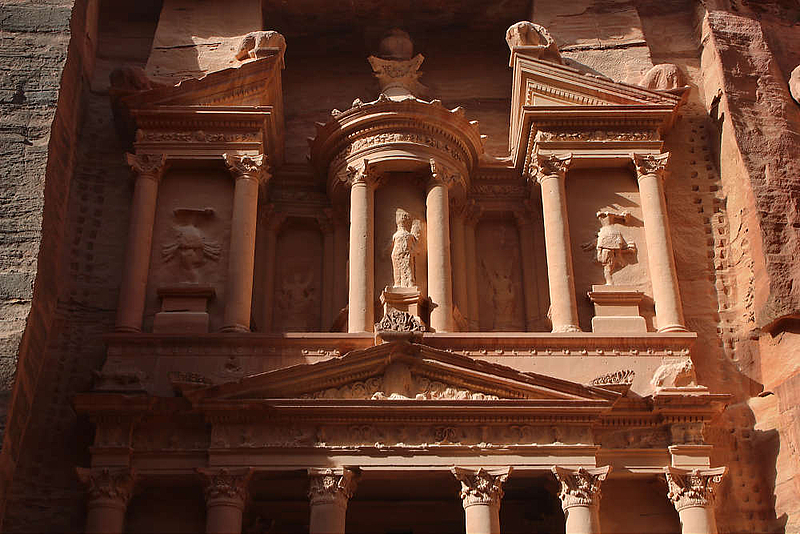 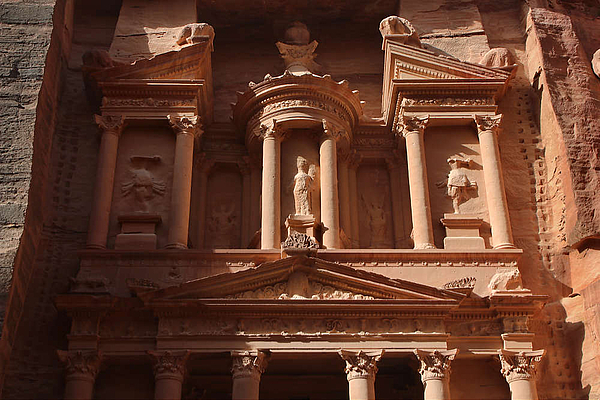 A closed circular temple structure with columns (monopteros) stands in the middle of a broken (open) pediment. This basic structure was taken from the Ptolemaic palace architecture of Alexandria. There are parallels, for example, in the architectural representation of a wall decoration of the Casa del Labirinto in Pompeii (70-60 B.C., Italy), in which a similar round temple appears in perspective shifted backwards between high columns with a broken pediment.

The main figure in the middle is identified as the goddess Isis by some attributes and the basileion on the top of the pediment directly below her. More about this on the next pages.

In most depictions of humans and animals the faces and body features have obviously been destroyed for religious reasons. Researchers assume that this iconoclasm may have already taken place during the reign of King Malichus II (40 - 70 AD). (S. Farajat & S. Nawafleh, S. 383/384)

The six three-quarter columns at the front, and the quarter columns in each of the two niches have floral capitals that are smaller and shorter than those of the lower order. However, as on these, intertwined tendrils, varying with each capital, decorate the middle section between the corner volutes. There are also bosses in the shape of a pine cone in serrated leaves on the long sides of the abacus.

The frieze of the entablature is decorated with garlands of laurel leaves (or oleander?), ivy, vine leaves, pine cones, pomegranates and grapes hanging between masks with destroyed faces and ribbons on either side of the head.
(see the detailed photo above)

At the very top of the facade is a nearly 3.5 m high urn on a large capital. Its front is badly damaged, because Bedouins have shot at it again and again in the hope that gold pieces and precious stones suspected in it would fall out. They believed that an Egyptian pharaoh on the run had hidden a treasure there. Therefore they gave the tomb the Arabic name "Khazneh al-Fira'un" (Treasury of the pharaoh, in short: al-Khazneh).