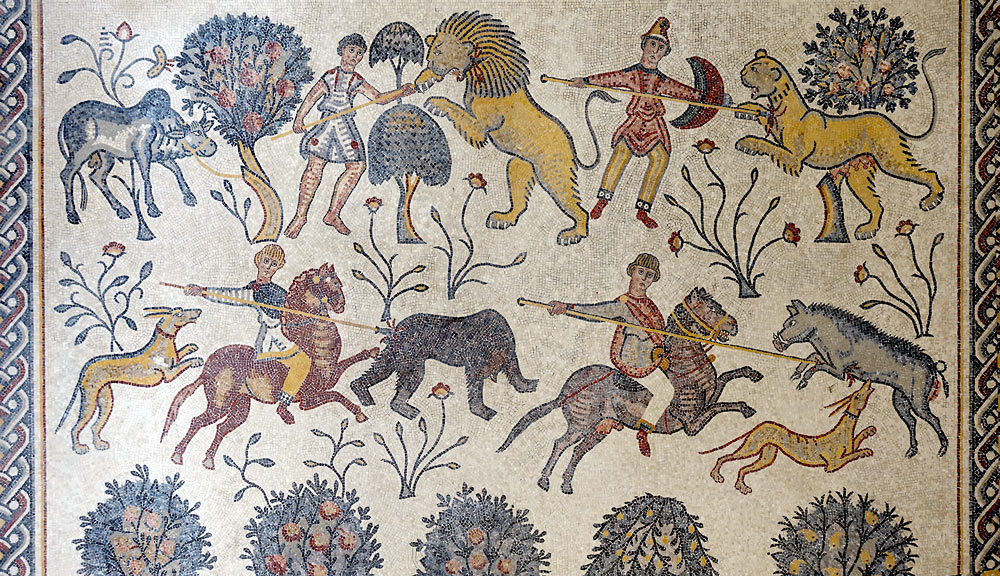 The Diakonikon-Baptistery mosaic with its hunting and pastoral scenes of colourful almost intact tesserae is one of the most remarkable Byzantine mosaics in Jordan. It was discovered in 1976 by Fr. Michele Piccirillo in the northern hall of the Moses Basilica, below a simple mosaic floor. A cross-shaped baptismal font was also discovered on the eastern end of the hall.
Detailed description 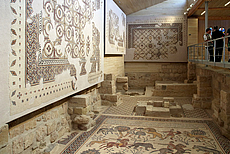 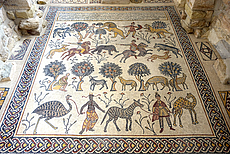 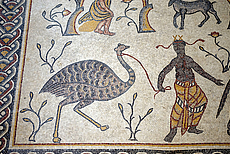 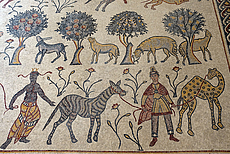 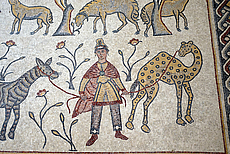 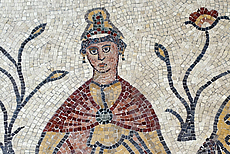 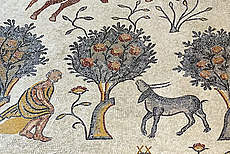 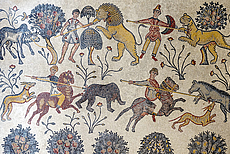 The middle field of the mosaic, framed by a chain-style ornamental border, is divided into four registers on a uniform white ground with stylized flowers.

The size of the standing figures range between 107-120 cm. The tesserae were sorted carefully into different shades of color and were applied to create an illusion of three dimensionality. The human faces were done with smaller fragments.

In the first register we see a zebu tied to a tree and a shepherd fighting off a lion's attack. Then follows a soldier with a Phrygian cap, armed with lance and shield, spearing a lioness.

In the second register, two mounted hunters with dogs are spearing a bear and a boar. In the third one, a shepherd sits on a stone and looks at his goat and fat-tailed sheep grazing under fruit trees.

The fourth register shows a black man with bare torso and colorful tunica leading a captured ostrich, and a man dressed with cloak and Phrygian cap, holding the bridle of a zebra and a dromedary, that has a spotted fur like a leopard.

The work is dated (equivalent to August 530 A.D.) and signed. It was created by the mosaicists Soelos, Kaiomos and Elias at the time of Bishop Elias and the Roman consuls Orestes and Lampadius. The Greek inscription also states the building's function as “diakonikon,” which is a chamber where the vestments, books, and religious utensils were kept.

A cross-shaped baptismal font was discovered on the eastern end of the hall. On three arms of the cross there are steps while at the southern arm there is a semicircular tub instead.

The spaces between the arms are decorated with mosaic knots of complex geometric design. One of them shows a bunch of grapes in the center. A fish scale design mosaic with flower buds decorates the floor around three sides of the font.

Plural tesserae. A small piece (as of marble, glass, or tile) used in mosaic work