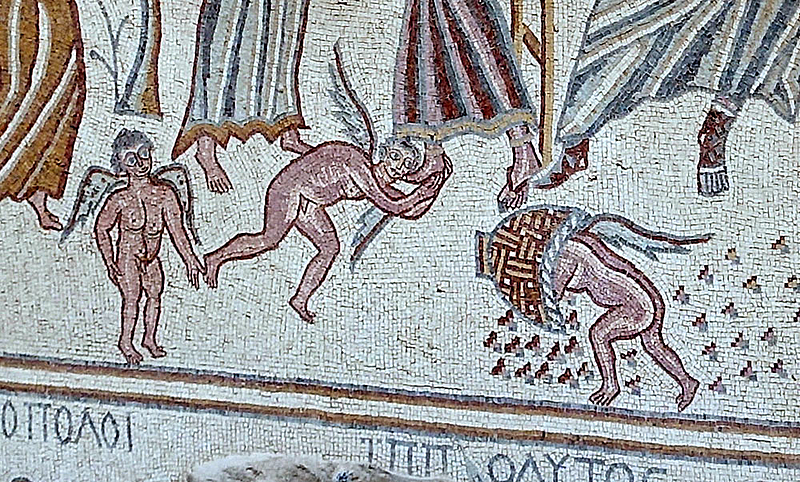 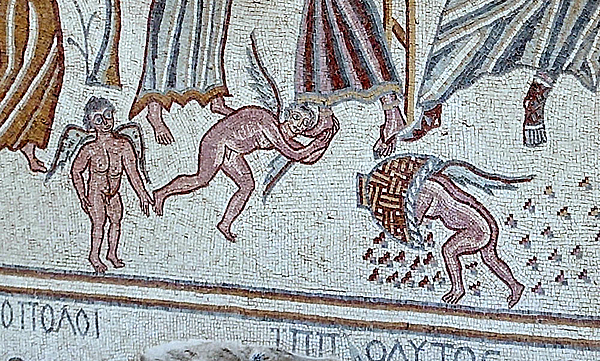 On the right in the picture a Cupid/Eros puts his head into a beehive, from which the bees swarm out. The scene is connected to the poem The Honey Thief by Theokritos (310 - 250 BC): Once Eros stole honey from a beehive and was bitten in the fingers by the insects. He stomped on the ground, jumped up and rebelled against the goddess Aphrodite (his mother) that such a tiny animal like the bee can cause such a powerful pain. But Aphrodite replied laughing that he shouldn't complain, because: "Don't you resemble the bee yourself? How tiny are you, too, and make such mighty wounds!

The parable told in this poem is taken up in art history in countless depictions of Venus with Cupid as a honey thief, for example in the famous painting by Lucas Cranach the Elder in the National Gallery London.

The Eros in the middle caresses the naked foot of Aphrodite in a submissive gesture.

The Cupid standing at the lower edge of the picture seems to look at Aphrodite and to point helplessly to Hippolytus in the middle mosaic field, because he rejected the Phaidra, which had fallen passionately to him, and the love arrows of Eros thus remained ineffective.