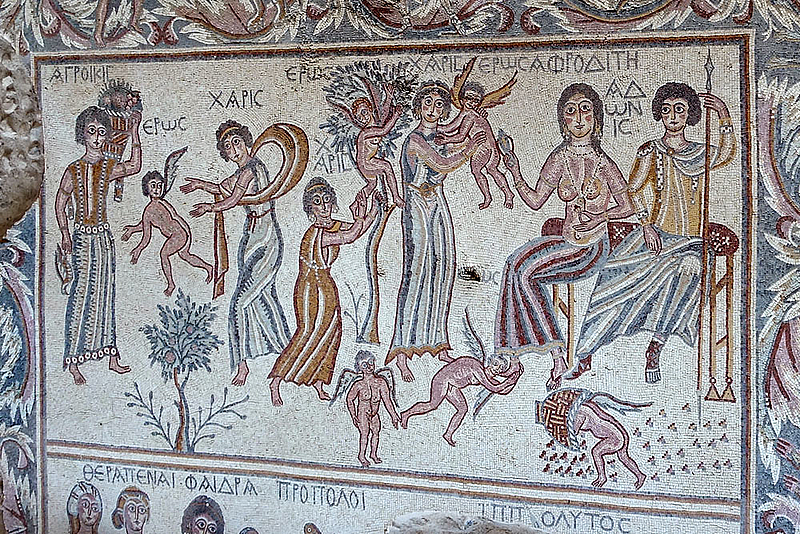 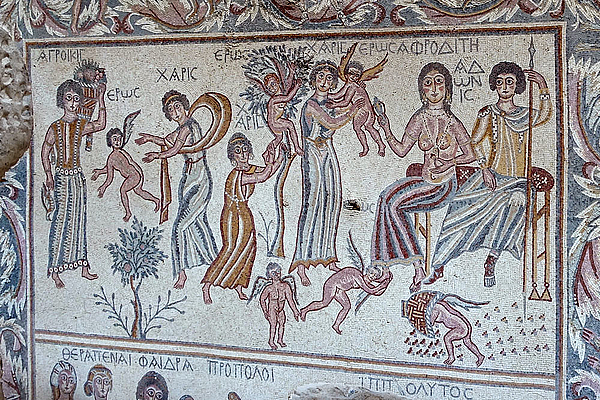 The largest panel of the carpet is dominated by Aphrodite seated on a throne next to Adonis who holds a lance.

A Grace presents to Aphrodite a Cupid whom she beats with a sandal. A second Cupid caresses Aphrodite's bare foot in a submissive gesture. On the lower right an Eros puts his head into a beehive, from which bees swarm out - see the detail photo and the explanations in connection with the poem The honey thief by Theokritos (310 - 250 BC) on one of the following pages.

A second Grace grabs the foot of yet another Cupid who attempts to take refuge among the branches of a tree, and on the left, a third Grace chases a fleeing Cupid with only one wing.

The Cupid/Eros standing at the lower edge of the picture seems to look at Aphrodite and to point helplessly to Hippolytus in the middle mosaic field, who rejected Phaedra despite the love arrows Cupid had shot at him.

Michele Piccirillo stresses how much the mosaic emphasizes the punishment of Eros by Aphrodite, which has to do with the Euripidian version of the Hippolytus myth, in which the three Charites (Graces) Aglaia, Euphrosyne and Talia shown here are also mentioned

A barefoot peasant girl on the left carries a basket with fruit on her shoulder and a partridge in her right hand, which can be interpreted as gifts chosen for the enthroned Aphrodi