Church of the Virgin Mary

The main pavement is a re-making of a mosaic floor which had been laid at the time of the construction of the church (end of the 6th/beginning of the 7th cent.). The well-preserved mosaic was constructed during the Umayyad period when the church was restored.

The mosaic consists of a square frame decorated on the outer edge by a series of serrated points. In the center are a round medallion and an inscription which are enclosed in a guilloche. In turn, two interwoven squares, which form a star, surround the central design which lies inside another circle. Finally, all of this is enclosed in a circular border made up of interlaced smaller circles.

In the spaces between the square frame and the circular composition are two pairs of geometric-floral motifs. Next to each one of the eastern pair, which are in the form of rosettes, there is a tray of fruit with a knife.

A square containing a Solomonic knot in a circle is superimposed on the grid at the entrance from the west. Flowers, leaves, stylized fruit and diamonds fill the empty spaces of the mosaic’s white background. 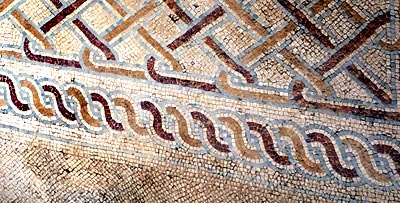 An ornament of interwoven and overlapping lines. The individual lines can form cord-like ellipses or circular paths. 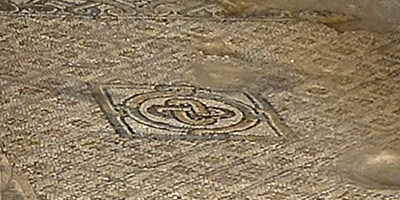 A traditional decorative motif, found in many cultures. On the photo, a Solomon's knot in the mosaic floor of the Church of the Virgin Mary in Madaba, Archaeological Park 1.