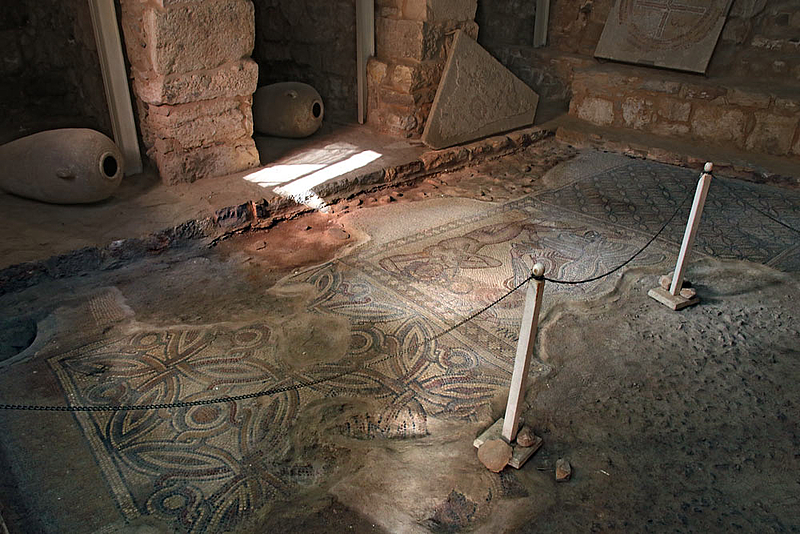 next
prev
another view
The Bacchic Procession, view of the space
© Foto: Haupt & Binder

This mosaic with geometric panels and figurative scenes once decorated a room in one of the mansions on the southern slope of the Acropolis. It is probably the most characteristic of the mosaics discovered by the Christian Bedouins of Kerak, who fled to the abandoned ruins of the city of Madaba in 1880. Through G. Manfredi, the parish priest, it is known that the scene consisted of at least three figures, but only two figures remain, a Maenad and a Satyr.

Both figures of the Greco-Roman mythology were followers of Dionysus / Bacchus, the god of wine. The Maenad or Bacchante, dressed in a blue tunic that accentuates her body, performs a dance in which her left hand strikes cymbals that are tied to her right foot. Next to her, a naked Satyr holds a stick in his right hand; the head of the figure is a modern restoration. According to Michele Piccirillo, the Bacchic scene certainly came from the same workshop as the Mosaic of Achilles (now in the Church of the Apostles) and can probably be dated to the first half of the 6th century.

In the floor panel, on the right side of our second photo (in the slider), there are pairs of rams and peacocks facing each other from either side of a high-footed jar from which grow two vine branches.

See the detail on the next page.

Several old houses and courtyards display mosaic floors found in situ or in other places, as well as archaeological and ethnographic exhibits.