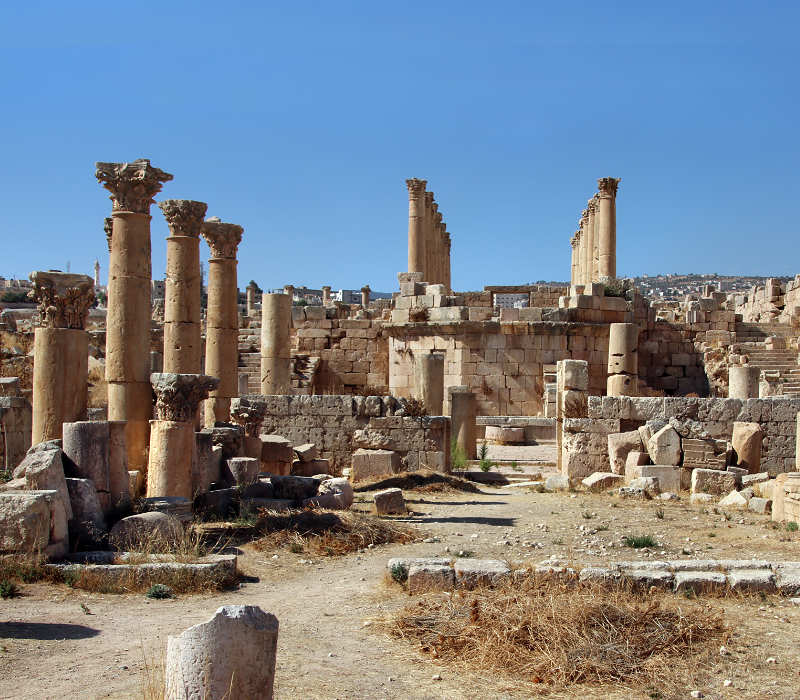 Church complex of the Cathedral

The largest church complex in Gerasa extends for 163 m over several hillside terraces south of the Sanctuary of Artemis. The highest terrace is 18 m above the level of the Cardo (the main road), the starting point of this description.

About 100 m after the intersection with the southern Decumanus, on the left side of the Cardo, one sees the entrance to the so-called Cathedral. This name has become common, although there is no clear evidence that it was actually the seat of a bishop documented in Gerasa since 359 AD. It is the oldest church in the city, built in the first half of the 5th century on the platform of a temple from the 1st/2nd century AD (thus older than the Sanctuary of Artemis next to it), which had been destroyed and abandoned for some time. Occasionally one can read that the former sanctuary was dedicated to the Nabataean god Dushara or to Dionysus (Greek god of wine), who was later supposedly identified with him, but the excavations in the 1990s did not find any evidence for this.

The builders of the Cathedral adapted the propylaeum of the temple on the Cardo and assembled the pedimented portal from spolia (parts of older buildings) of the 2nd century, taken from elsewhere. Also, the rooms on either side of the entrance, whose doors can be seen from the Cardo, were later placed in front of the east side of the original temple propylaeum and therefore cover the mosaic floor of the once wider portico. 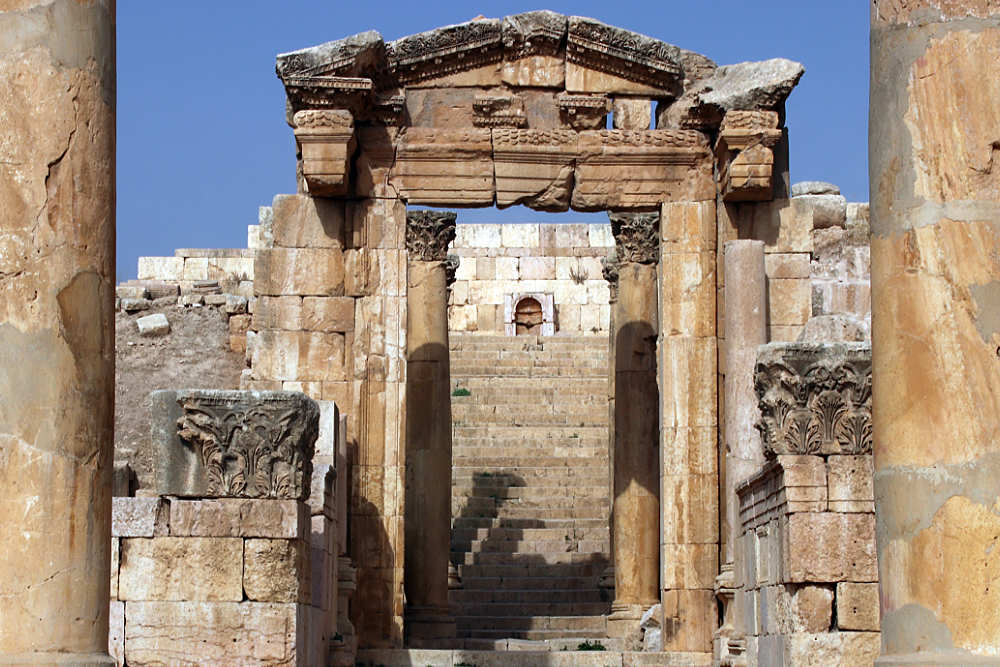 The Byzantine staircase overlaps that of the earlier temple and is more than 2 meters shorter and consequently steeper than the latter. It leads to a platform in front of the apse wall of the Cathedral, where a small shrine in a niche with a shell-shaped finish honors the Virgin Mary, accompanied by the archangels Michael and Gabriel. All three names appear in a band under the shell. Corridors on either side of the church lead to its side doors, as well as along the right to the main portal at the western atrium. 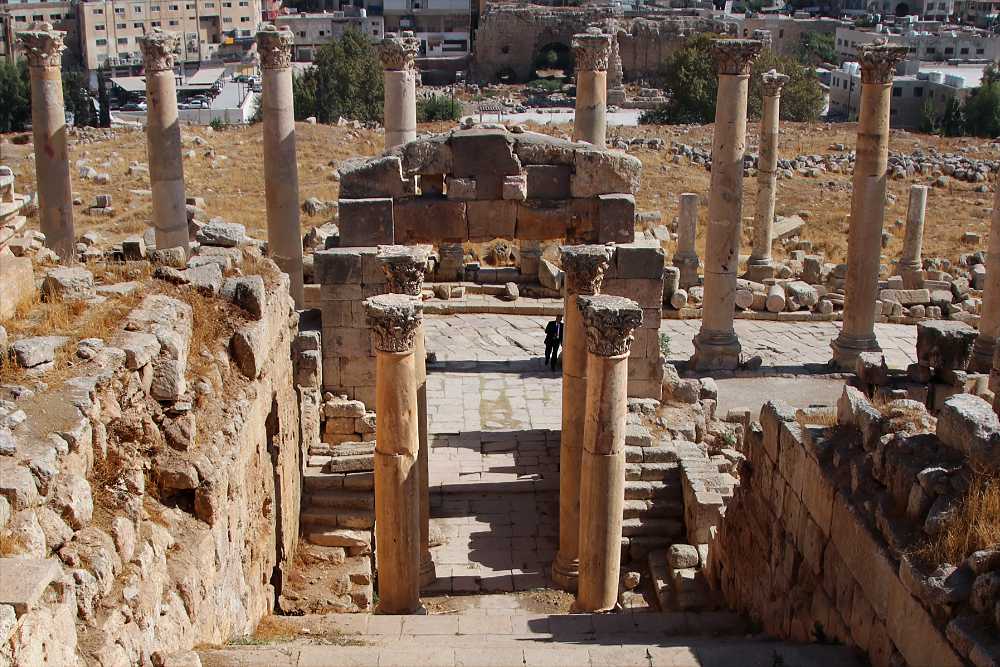 The four columns with Corinthian capitals at the beginning of the staircase supported a gallery open to the cardo behind the pediment of the portal, which belonged to a gallery with portico on the upper floor on both sides of the staircase.

The Cathedral was a three-nave basilica with a very wide central nave and two narrow side naves, separated by rows of closely spaced columns. On both sides of the rather small apse there were rooms. The church could be entered through three gates at the main western portal, as well as through three doors on the north side and two doors on the south side. A chapel at the outer southwest corner of the church with access also from the atrium was added later. 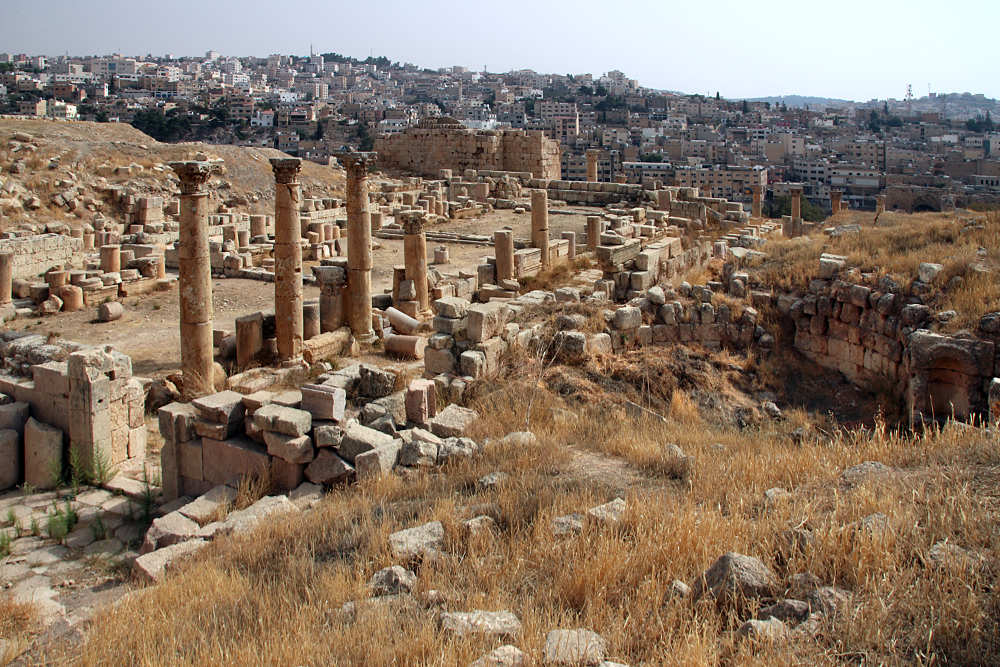 The ruins of the Cathedral seen from the southwest. On the right, the apse of the side chapel.

The Cathedral, like all the buildings of the complex, was built from stones of the temple on the same site and from spolia (components) of other older buildings, including the sanctuary of Zeus. At least the upper part of the walls and the apse of the church were decorated with mosaics. 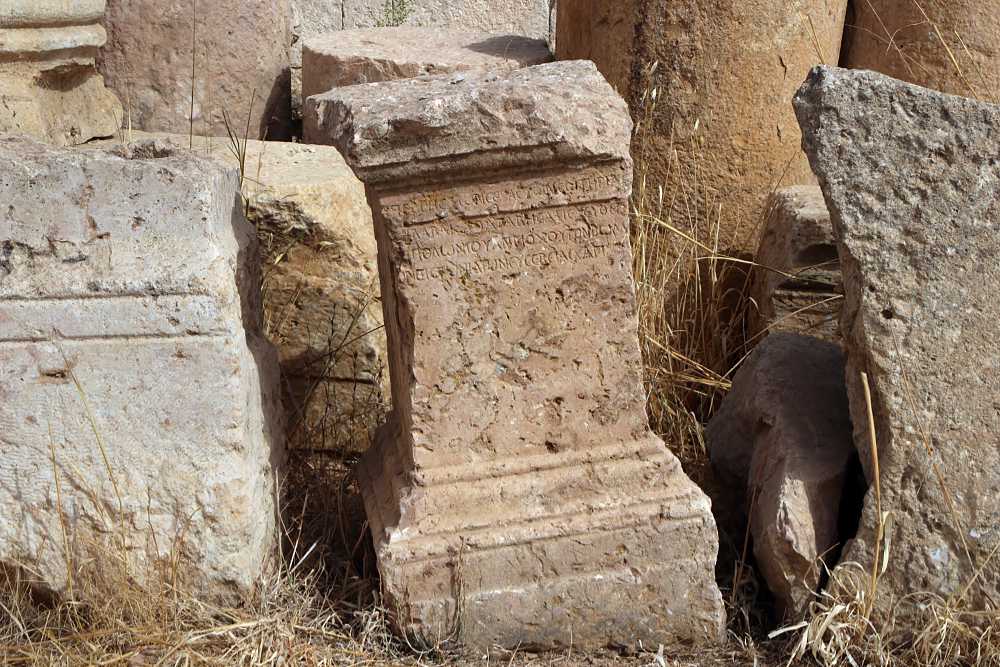 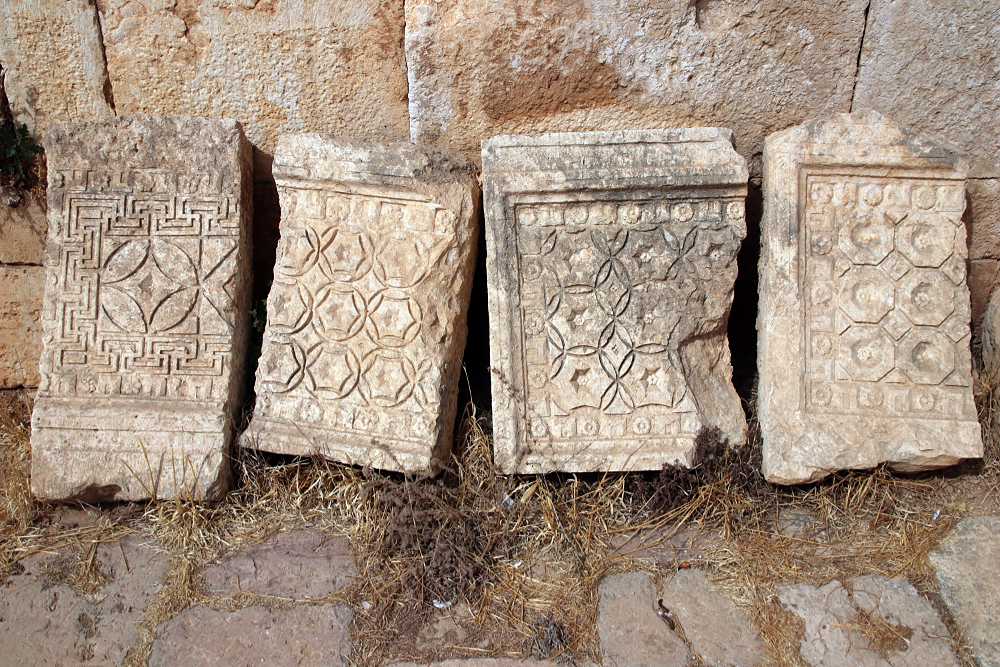 Parts of pre-Christian buildings with Greek inscriptions have also been included in the Cathedral. In the area of the ruin today, there are numerous pieces of rubble with geometric decorations. 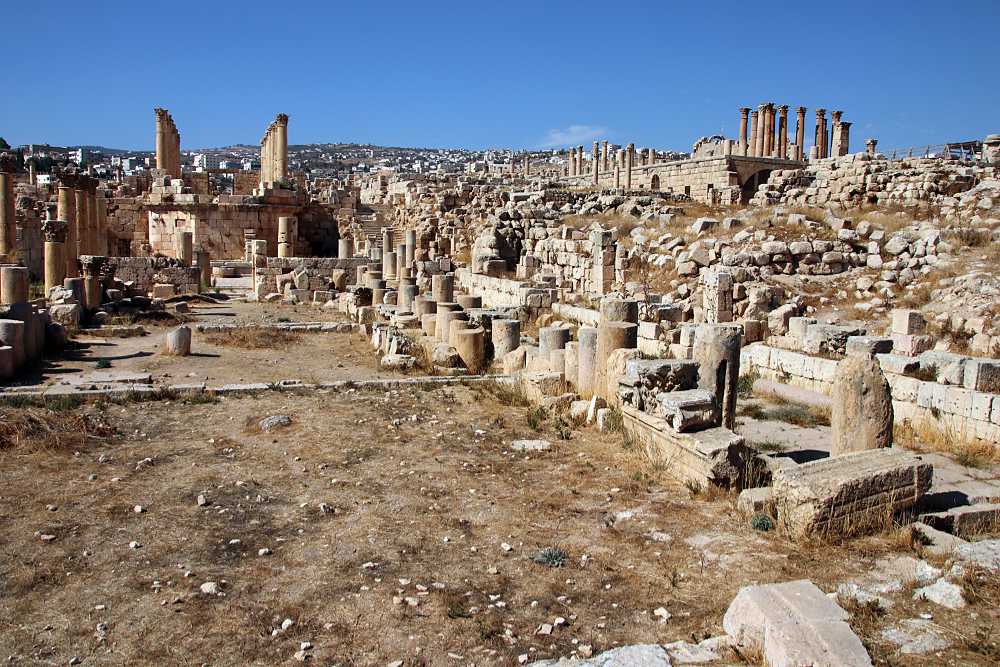 View from the apse of the Cathedral over the area of its nave towards the west. In the left background one sees the apse and the columns of the Church of St. Theodore above the Fountain Court. The columns on the right in the background are part of the Temple of Artemis. 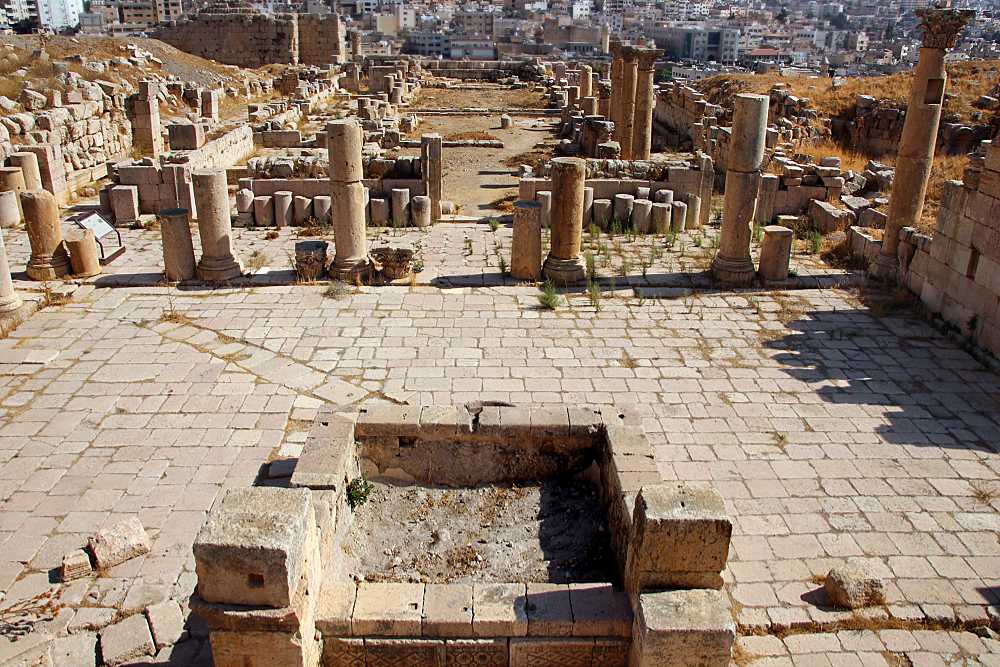 The main entrance to the Cathedral was on its west side at a large atrium with colonnades, called Fountain Court because of the square basin there. When the basin was discovered during the Anglo-American excavations of 1928 to 1932, archaeologists believed they had found a fountain mentioned by Epiphanius, bishop of Salamis in Cyprus, in 375 AD and dated it to that period. According to Epiphanius, visitors to Gerasa had told him that there was a well there whose water always turned into wine on the anniversary of the miracle of Cana (John 2:1-12). In fact, the fountain probably dates from the time of the Cathedral's construction, that is first half of the 5th century.

The framing of the 4.7 x 4.5 m basin was assembled from parts of structures from the 1st or 2nd century AD, which can be seen from the profile shapes that were common in that period. The semicircular bowl on the eastern side is also the spolia of a limestone niche. 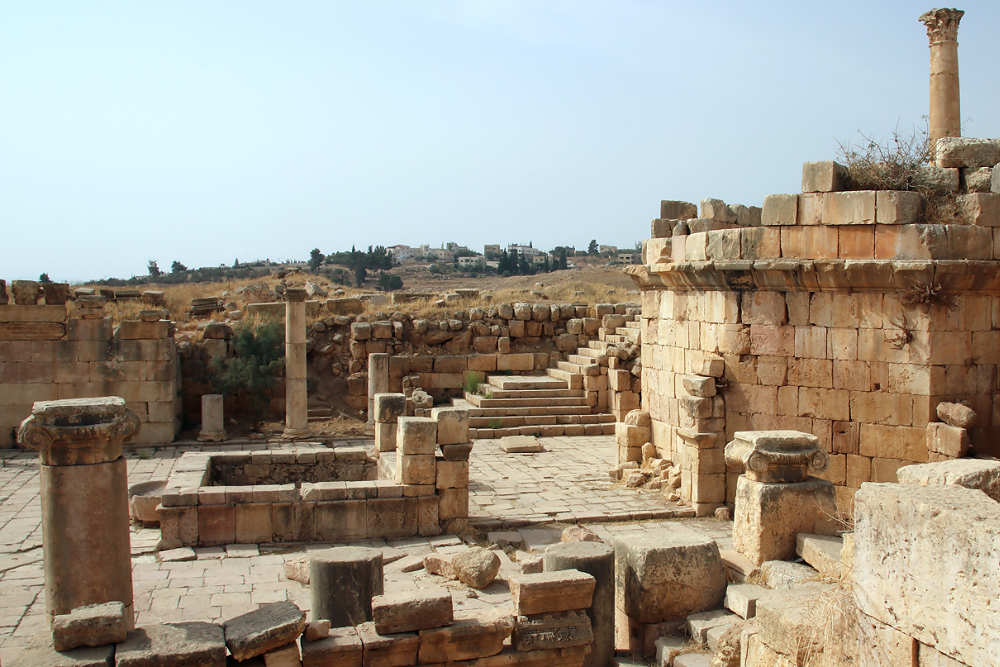 When the Church of St. Theodore was built in 494 - 496 AD, the originally square courtyard was shortened on its west side by the new apse. Extensive alterations took place for liturgical purposes, in which the fountain played a central role. The floor between the apse and the basin was slightly raised and arches on low parapet walls, the remains of which can still be seen, demarcated the area to the north and south. In the center of the apse wall stood a kind of throne overlooking the fountain, the western side of which, facing the throne, was embellished by panels with geometric patterns from an old coffered ceiling. Square holes at the upper corners of the pillars may have been supports for a canopy, to which curtains may have been attached all around the fountain. Under the northern area of the pavement of limestone slabs there are diagonal conduits for water supply and drainage, as can be seen from the cover plates. 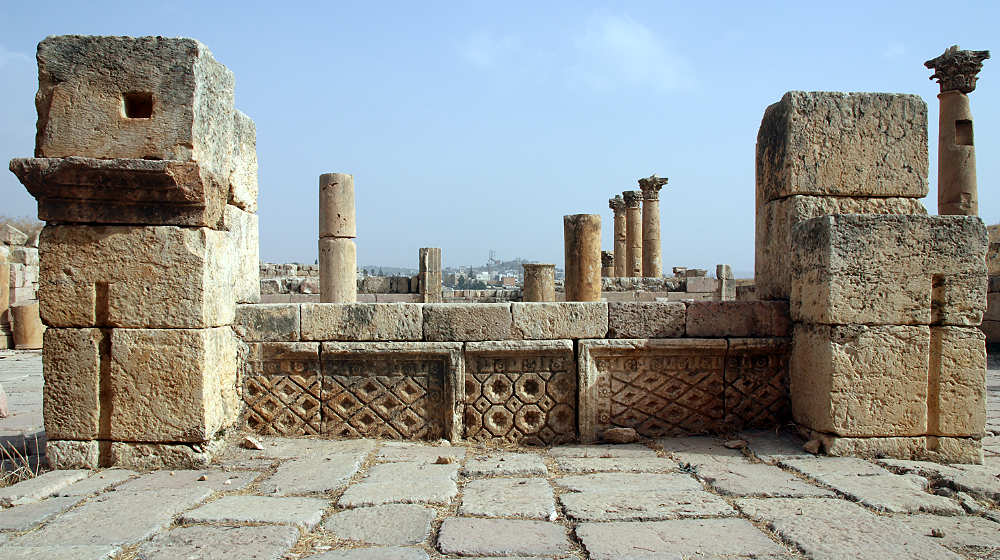 View from the Cathedral looking west toward the Church of St. Theodore with the towering rows of columns of the nave.

From Fountain Court, two wide stairways on either side of the projecting apse lead up to the Church of St. Theodore. Inscriptions indicate that the church was built in 494 to 496 during the episcopate of Bishop Aeneas "in honor of the victorious Theodore; immortal martyr." In the photo below, you can see the substructure and temple of the Artemis sanctuary in the background on the right. 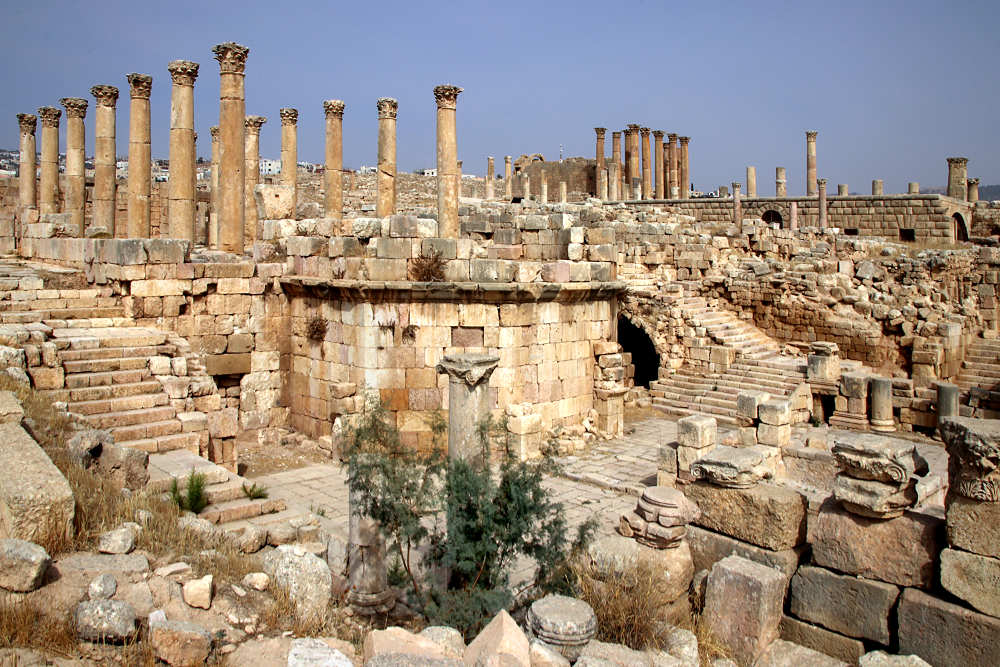 Also for the Church of St. Theodore many spolia of buildings from Roman times were used. The proportions of the three-nave basilica are much more balanced than those of the earlier built Cathedral. The apse is as wide as the nave, whose roof was supported by tall columns with Corinthian capitals. The Church of St. Theodore and also the adjacent smaller chapels and rooms were decorated with floor mosaics and stone and marble slabs arranged into decorative patterns. 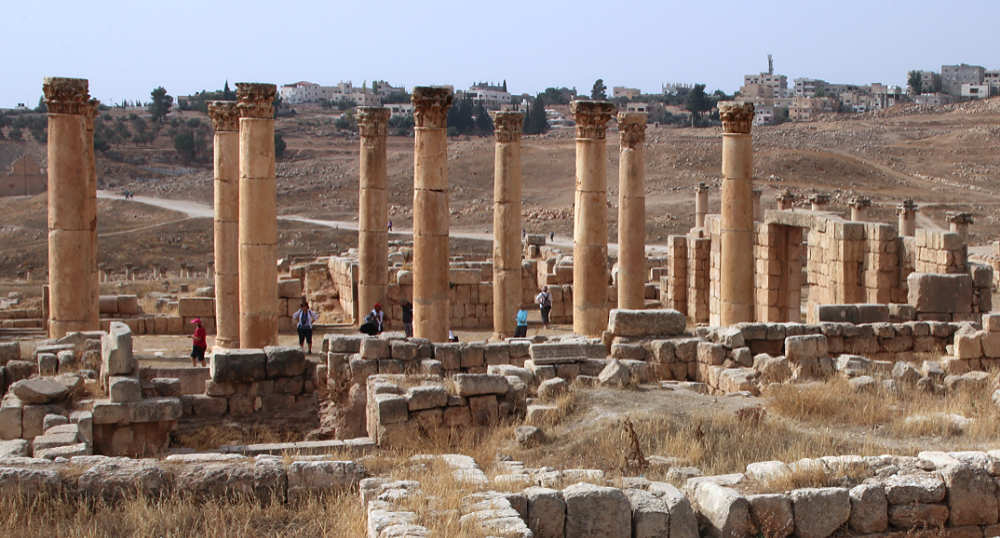 The tall columns of the nave of the Church of St. Theodore, seen from the north. 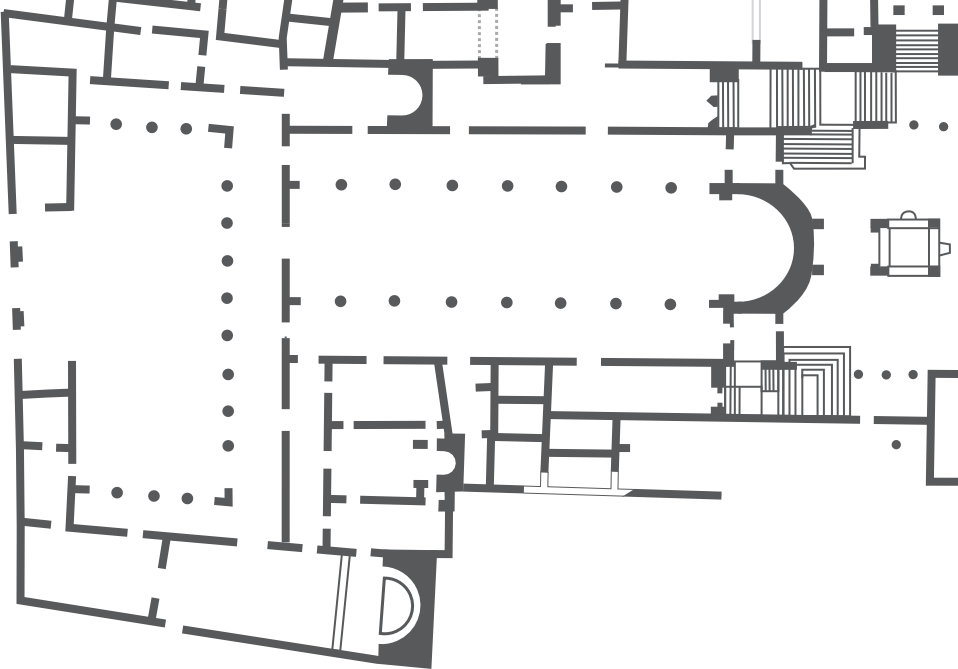 Later on, a chapel to the north and another to the south, as well as a baptistery, were added to the Church of St. Theodore. In the quite well preserved baptistery there is a niche, which may have been the waiting area before the baptismal chamber, behind which was the exit. This would have made it possible to baptize numerous people in quick succession. 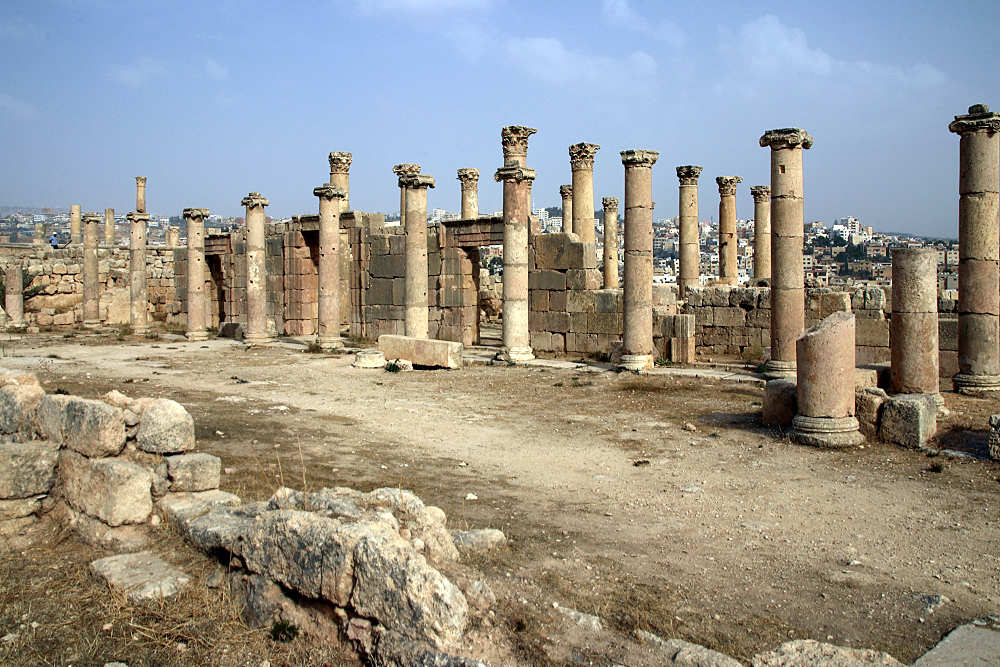 In front of the main entrance in the west, a large portico extends across the entire width of the church. A Greek inscription is carved into the lintel above the central doorway. 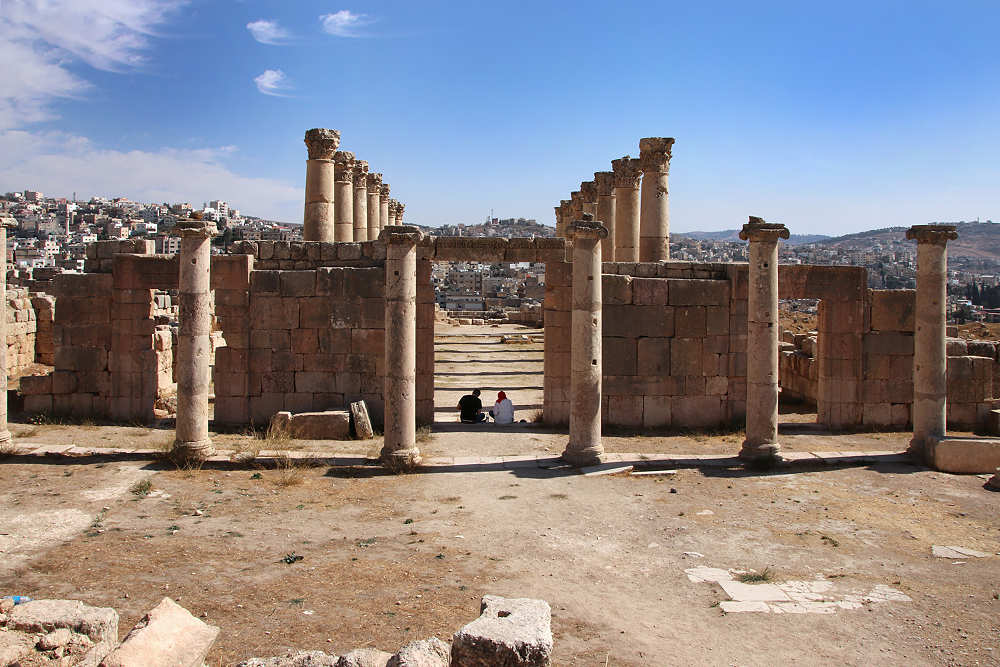 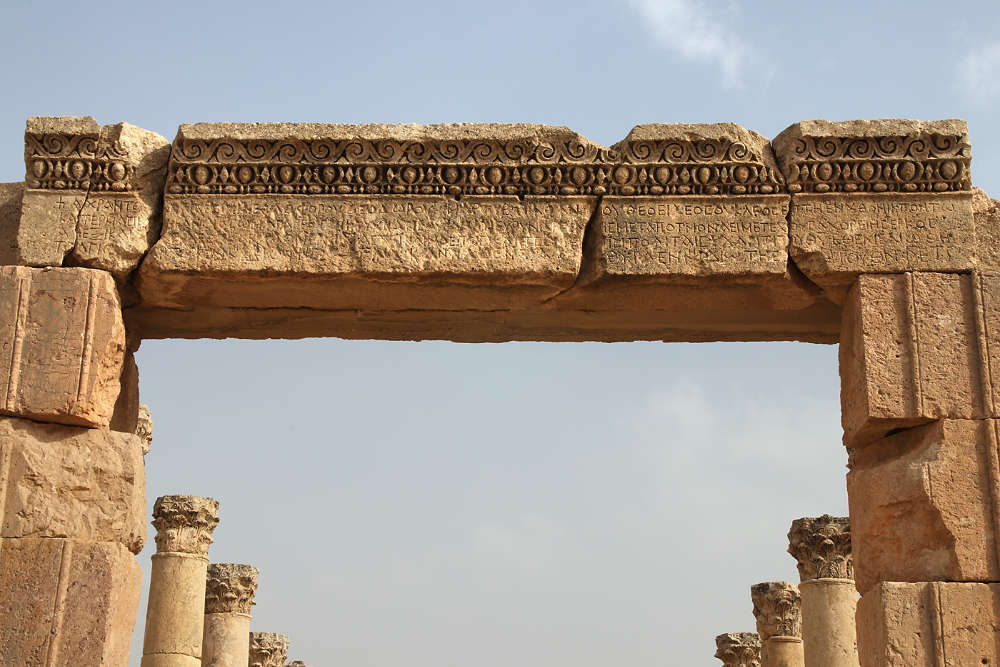 Apparently, the Church of St. Theodore was being renovated when it collapsed due to the devastating earthquake of 749 AD.

Between the Fountain Court and the Sanctuary of Artemis, west of the so-called Serapion Passage, is a residential area of ecclesiastical dignitaries with reception rooms. This once included beautifully equipped heated baths, which, according to a Greek inscription, were built in 454/455 AD by order of Bishop Placcus. Columns, friezes, capitals and other spolia from the naos (shrine or temple) of the Zeus sanctuary, which the bishop had demolished, were also used for it. Part of the Clergy House and Placcus Baths, seen from the north. In the background the tall columns of the Church of St. Theodore.

Users and guests entered the bathhouses from the path leading to the Sanctuary of Artemis through a small open courtyard. The eastern building may have been a large meeting room, while the other side housed the baths, which included a reception room and three heated rooms with small bathtubs.

The Placcus Baths are considered a good example of the transition from Roman-style baths with large pools for groups of bathers to the single baths of the post-Byzantine period. A century after the construction initiated by Placcus, Bishop Marianos had these baths modified to resemble those of the Umayyad palaces in the region. An inscription on a mosaic mentions the restoration of the baths in 584. 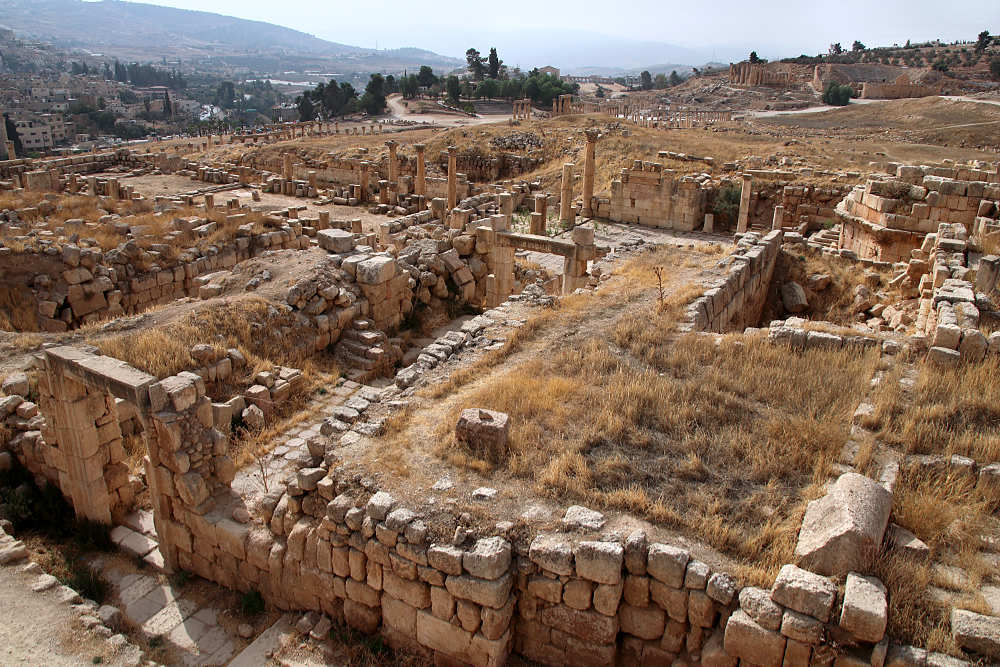 The Serapion Passage with two gates between the Fountain Court (behind) and the path up to the Sanctuary of Artemis (in the foreground). To the right of it extends the complex of the Clergy House and the Placcus Baths. East of the passageway (to the left of it in the photo) at Fountain Court is the Glass Court, so named because large quantities of colored glass remains were found there, suggesting that glass was made or processed there in early Islamic times. Right next to the Sanctuary of Artemis, near the Serapion passage (in the background of the photo), you can visit the functional replica of a device for cutting stones found in Gerasa. The mechanical saw was installed in the rooms in the substructure of the sanctuary around the middle of the 6th century. It is the first discovered machine with a crankshaft system, through which the circular motion of a water wheel is converted into the horizontal back and forth of the saw blades. 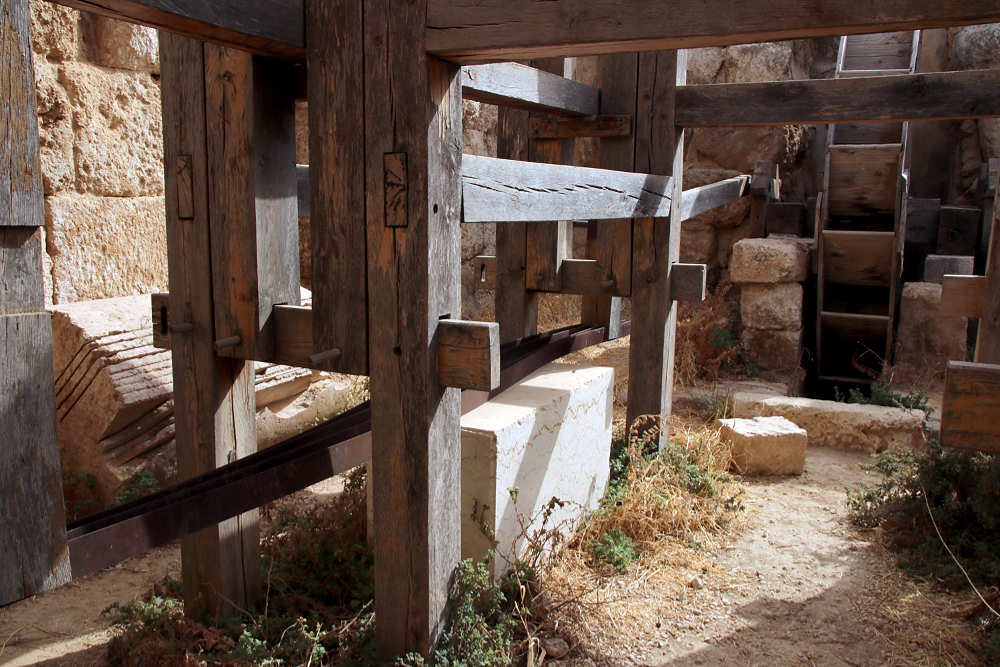 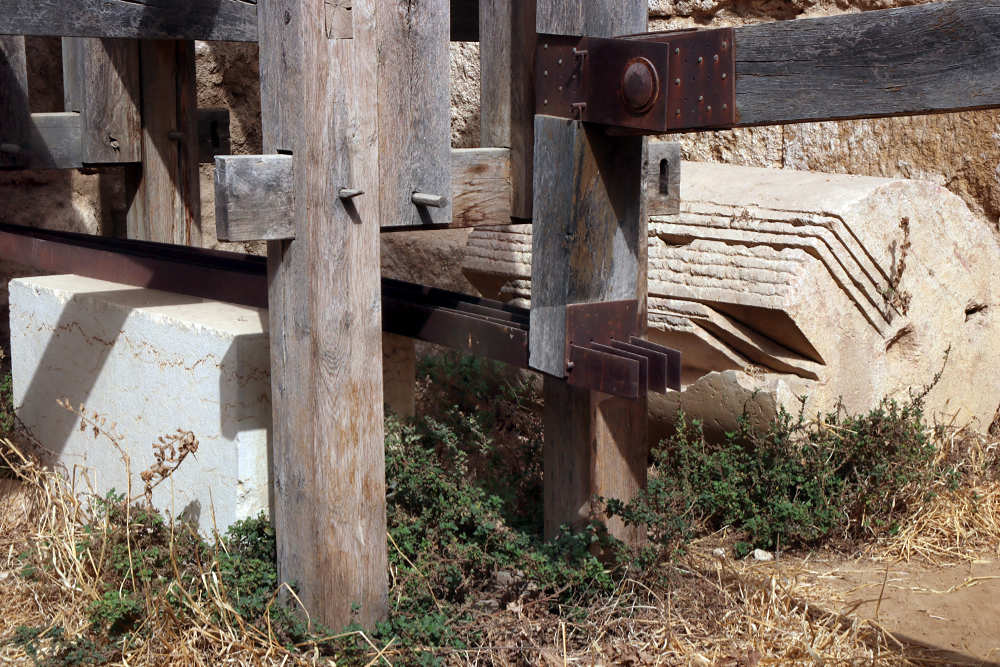 Two aqueducts fed a large cistern from which the water flowed into a smaller basin and then through a channel up to 4 m deep over the water wheel, driving it. This set in motion horizontally a set of saw blades on a wooden frame. The incisions of an unfinished sawing operation can be seen on a limestone column drum.

The replica of the Byzantine sawmill was prepared in France and assembled on site in Jerash by a group of students from the Delataille Professional Technical School.

(© Text by Universes in Universe from information in different sources.)