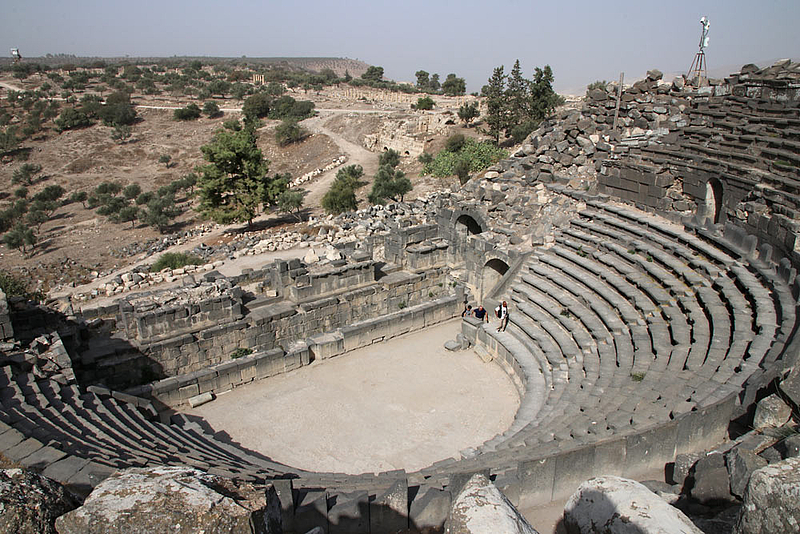 The smaller and better preserved of the two metropolitan theatres is built of basalt, filled with limestone and earth. The cavea (semicircular seating area), open to the west, is approx. 52 m wide and could seat about 3000 spectators. It is divided into two floors by a gallery on which the entrances and exits (vomitoria, from vomere - spit out) are located.

The diameter of the orchestra was 20,5 m. It was accessible through high arched tunnels on both sides.

During excavations in the 1960s, the larger-than-life marble statue of a sitting tyche was discovered. With the cornucopia as an attribute, it is depicted as the goddess of destiny, providence and coincidence (the Roman equivalent is Fortuna). She was probably placed between the places of honour of the first row and can be admired today in the Museum of Gadara - photo and information.

It is probable that this theatre also served as bouleuterion, as a meeting place for bouleutes, the city councillors, whose names are documented by inscriptions of the later Roman period in Gadara. 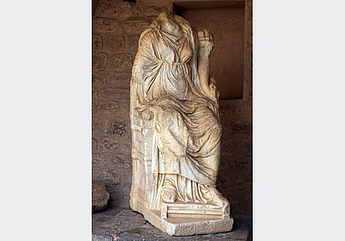 Placed between the places of honour of the Western Theater. Can be admired today in the Museum of Gadara.

In classical Greek theatre, the circular space for the choir and initially also for the actors, before they performed on an elevated stage.

There were no more choirs in the Roman theatre. The orchestra was reduced to a semicircle in front of the stage and on raised steps at its edge there were honorary seats for senators and other dignitaries.