Darat al Funun presents the exhibition Three Artists - Three Generations by Bady Dalloul, Ziad Dalloul, and Maha Maamoun. The exhibition features a convergence of individual styles by artists who are at different stages of their careers, and who each follow their own path questioning familiar narratives, histories, and memories.

Bady Dalloul (* 1986) graduated in 2015 from the École Nationale Supérieure des Beaux-Arts de Paris, and works in text, drawing, video, and objects. In his work, he confronts and brings together the imaginary and the real, while challenging the process of writing history. His installation A country without a door or a window (2016/2019) shown in the Blue House consists of 200 small drawings presented in a collection of matchboxes, together forming a constantly interrupted timeline depicting multifaceted scenes of daily life in the Syrian war.

Ziad Dalloul (* 1953) is one of Syria’s most established artists. Based in Paris since the early 1980s, his work comprises paintings, etchings, and artist books. Using subjects and objects from nature, he renders the reflections of memory in order to question nature as a philosophical approach, which aspires to open paths between the inside and the outside, the visible and the invisible, what is seen and what is imagined. For this exhibition, Dalloul created The sky is low, the sea is deep (2019), a five and a half-meter long quadriptych painting depicting a tragedy in four parts that is on view in the Main Building.

Maha Maamoun (* 1972) lives in Cairo, and works primarily with the mediums of text, photography and video. She is interested in examining the form, function and currency of common cultural, visual and literary images and symbols. Her installation The Subduer (2017), shown in the Main Building, is a subtle commentary on the sublime and banal machinations of bureaucracy. Her 2009 film Domestic Tourism II, also shown in the Main Building, takes a humorous but dark look at how the pyramids have been appropriated across years of cinema production in Egypt to reflect or construct personal narratives and official histories. 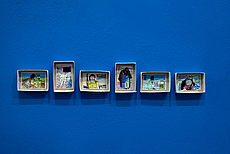 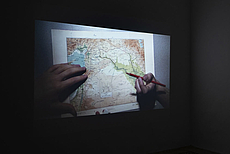 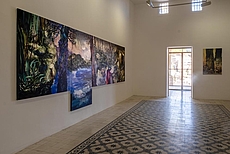 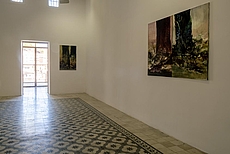 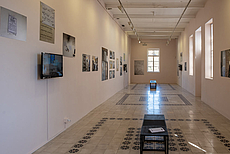 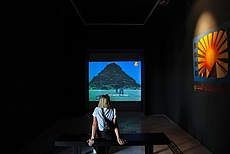 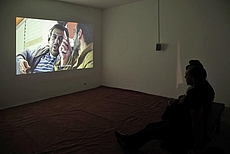 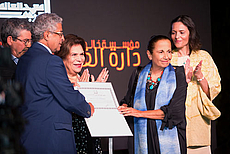 The Arab World Institute in Paris honoured artist Suha Shoman with the Prix de la Chaire Award for her creative achievements, and for founding and chairing Darat al Funun.