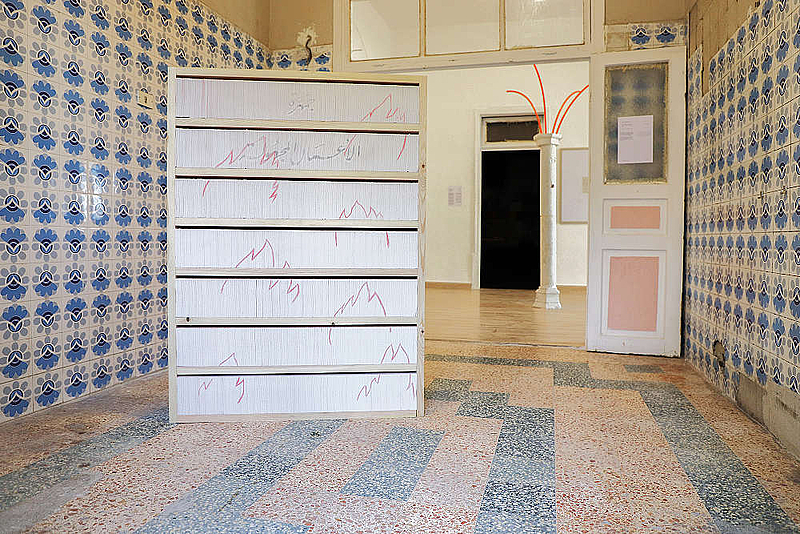 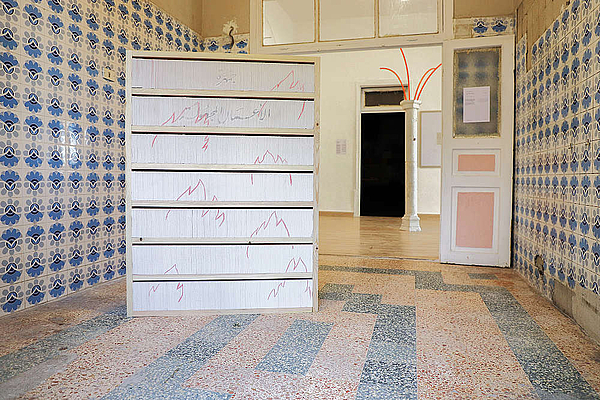 “How to See the Columns of the Castle as Palm Trees, ” 2019
Drawings on publications and wood
Commissioned by How to maneuver (Warehouse421, Abu Dhabi)

This library is made of one publication, the sixth in the Kayfa ta series, comprising a single verse of poetry on “Abdallah the Killed” (Abdallah al-Qateel), who is killed by the last thing he saw: the columns of the castle as palm trees. Abdallah the Killed is a fictional character that has a real genealogy. Nevertheless, he only exists in extensive footnotes that expound on his stories, and which form the body of this book and installation.

In the back is seen one of Hussein Nassereddine's palm trees:
The Complete Uncredited Works: The Palm Tree Forest, 2018-19
Salt/Ash, variable sizes

In the great Ibn Kathir’s ten-volume magnum opus “Al-Bidayah wal Nihayah”, Amrou Ibn Oubeid, a poet, witnessed a hall of columns, each topped with buttresses, filling the castle of Al Mansour like a field of palm trees. Inspired by Ibn Oubeid’s description, The Palm Tree Forest is a palm-like column cast from a mould based on the shapes he describes. Due to the exhausting process, which deteriorates the mould through repeated usage, only a limited number of columns can be produced.