People invented plaster during the Neolithic by burning limestone. This new material was used in daily life and for cultic practices.

A new tradition also appeared then, that of plastering skulls of the deceased which were removed after burial, when the flesh had decayed. The face was moulded onto the skull with plaster, and shells were placed as eyes and lined with bitumen. These skulls were kept in houses, thus they may represent an ancestral cult.

(Text in the Jordan Museum)

Exhibits from the beginnings of sedentariness (12,500 BC), until the Late Chalcolithic. Part of the visual informative tour through The Jordan Museum in Amman. 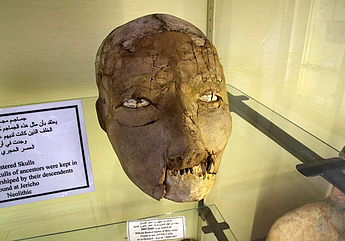