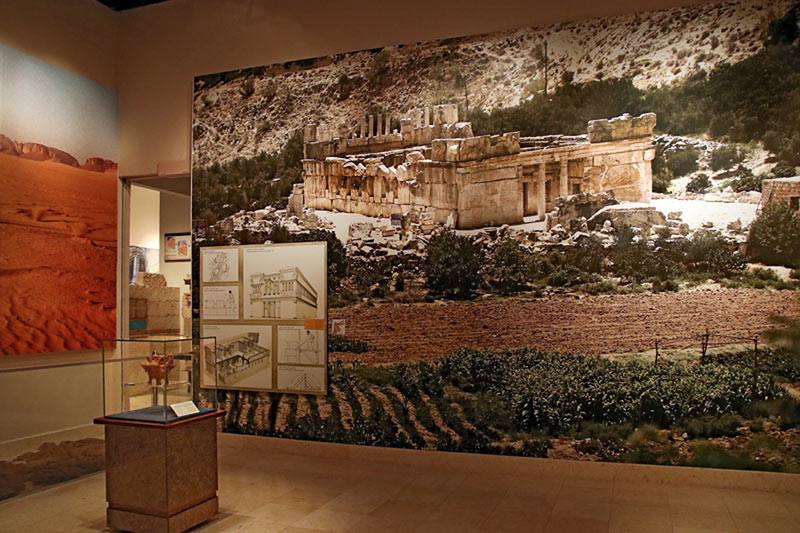 The Hellenistic site of Iraq al-Amir, pottery and coins from the 3rd to the 1st century BC.

About the Hellenistic Period 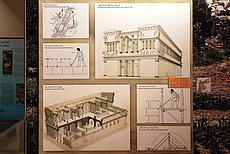 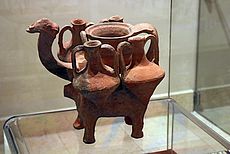 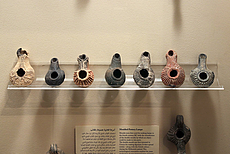 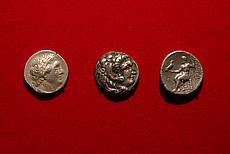 The victory of Alexander the Great over the Persian King Darius at Issus in southern Anatolia in late 333 BC heralded the beginning of a new era. Following their victory, Alexander's troops went on to conquer the territories of the Persian Empire, which included Jordan that was conquered in 332 BC. The Greeks ruled Egypt, Syria, and Mesopotamia for nearly two centuries. Consequently, the Hellenistic period was characterised by a blend of the prevalent Greek culture and that of the Syrian, Egyptian and Mesopotamian cultures.

The Wars of the Diadochi

With the might of his sword, Alexander the Great carved a uniquely unified empire that spanned over Europe, Asia, and Africa. Upon his death in 321 BC, however, the Empire was divided between his generals (Diadochi = successors): Philip IV who governed Macedonia and the Balkan Peninsula; Seleucus who governed from the Aegean Sea in the west to India in the east; and Ptolemy who governed Egypt and the southern parts of Syria, including Jordan, Palestine, and Lebanon. While Alexander’s three generals were initially committed to the Empire’s unity, they soon engaged in competition and armed conflict to fortify their dominions and expand the territories they ruled. In 306 BC, each general announced himself an independent king over his territory. The conflict was particularly fierce between the Seleucids who established their grip over all of Syria in the Battle of Ipsus in western Anatolia in 301 BC, and the Ptolemaic Kingdom of Egypt.

The struggle between the Seleucid and Ptolemaic Kingdoms over Greater Syria, known as the "Syrian Wars", marked the third century BC. The continuous war between these two Hellenistic powers finally ended between 201-195 BC with the Seleucids’ supremacy over the area. Throughout the struggle, Jordan, being part of southern Syria and given its economic influence and geographical location, remained a strategic conflict zone throughout this competition.

Jordan’s position in the long struggle between the Seleucid and the Ptolemaic Kingdoms is evidenced by several archaeological sites. Gadara (modern Umm Qais) was re-fortified as a border city against the Ptolemies by the Seleucid King Antiochos III around the beginning of the second century BC. He constructed the city wall, named the city "Antiochia Seleukia", and built a temple dedicated to Zeus Nicephorus. The Ptolemies on the other hand, re-founded Rabbat Ammon during the reign of Ptolemy II Philadelphos (283-246 BC) and named the city "Philadelphia".

One of the most important Hellenistic sites in Jordan is Iraq al-Amir, located about 17km west of Amman. The site is dominated by the palace known as Qasr al-'Abd, which is uniquely constructed from megalithic stones and is decorated with carved lions and panthers. It was the home of the Tobiad clan, known as ‘Tyros’. Joseph the Tobiad was tax collector for Syria, Palestine and Phoenicia under King Ptolemy III Evergetes in the second half of the third century BC. In 1993, a treasure of about 1000 tetra-drachmas of silver coins was discovered at Iraq al-Amir, dating back to Ptolemy III.

The middle of die second century BC saw the beginning of the end for the rule of the Hellenistic kingdoms. As both the Seleucid and Ptolemaic Kingdoms weakened, the Nabataeans were able to establish their commercial kingdom in the south of Jordan, and the increasing Roman interest in the area finally resulted in the occupation of the lands to the north and west of the Nabataean Kingdom in 63 BC.

More about in the
Nabataean section

© Wall text in The Jordan Museum