History of mosaics in Jordan

Fragments of a mosaic

The oldest mosaics found in Jordan are those in the fortress of Machaerous / Mukawir, dated to the Late Hellenistic period (1st century BC). Mosaics of subsequent centuries were uncovered in several regions including Raqmu / Petra, Humayma and Jerash. The overwhelming majority of mosaics found in Jordan, however, dates back to the 6th century AD during the Byzantine period.

These mosaics were used to decorate the floors of civil and religious buildings, while wall mosaics were less frequent. One of the most important floors is the unique ‘Madaba Map.’ This sixth century mosaic map, which was discovered in the spring of 1897, is one of the earliest known maps in the world. It covers the areas of the Phoenician Coast in Lebanon, the Jordanian Plateau, the Jordan Rift Valley, Palestine, Sinai and the Nile Delta in Egypt.

A number of centres for mosaic-making during the Byzantine period functioned around Jerash, Irbid, Amman and Madaba, with a significant amount of mosaic floors found in Madaba and its surroundings. Other mosaic-making centres must have existed in southern Jordan as well, as attested by discoveries in the churches of Petra and of Saint Lot at Dayr ‘Ayn ‘Abata in the southern part of Jordan Valley.

The tradition of mosaic art continued after the Muslim Conquest of Jordan. Mosaic floors decorated the Umayyad Palaces of al-Qastal, al-Hallabat, and Qusayr ‘Amra, as well as several churches at Madaba, Mount Nebo, Ma‘in and Umm ar-Rasas dated to the same period. 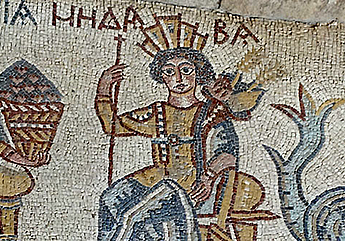 Extensive information and photo tours to some of the highlights of mosaic art of Byzantine times in Jordan.