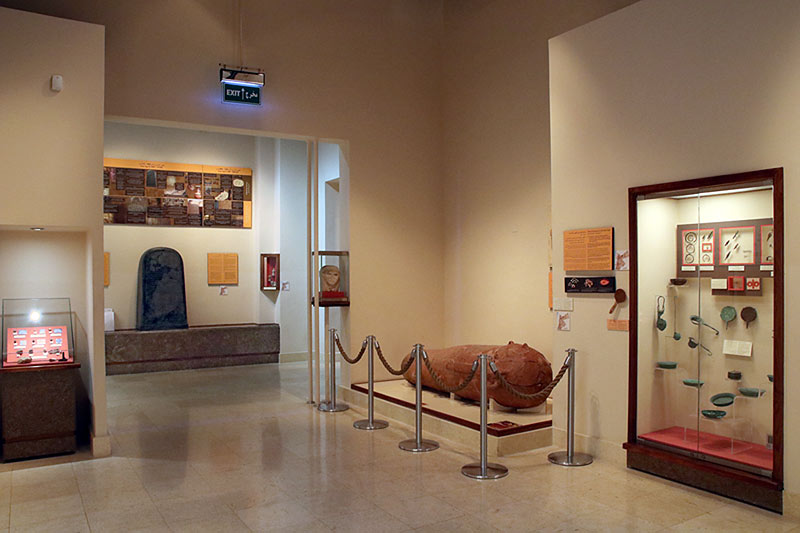 Exhibits from the periods between 3600 and 332 BC, with additional information.

The Iron Ages in Jordan 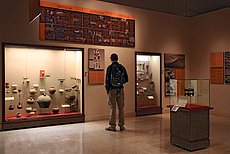 Start of the section 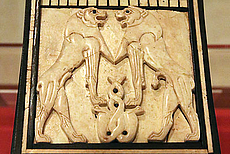 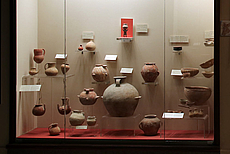 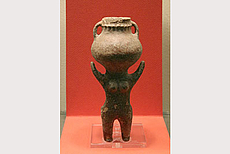 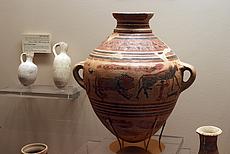 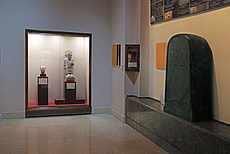 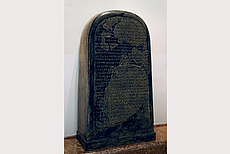 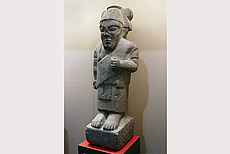 Major political changes took place in the Levant around 1200 BC.The most significant was the collapse of the three major empires that had controlled the region: the Egyptian, Hittite and the Cassite.This resulted in the emergence of new political forces, and the immigration of new ethnic groups into the region.

The previous political system, the 'City-States,' came to an end to be replaced by a political-ethnic system, and the establishment of tribal kingdoms.

Iron Ages refers to the period when iron was first mined, smelted and used. This era is also distinguished by the variety of written sources that provide information about Jordan. A number of sources are from Egypt and Mesopotamia, others are the Biblical narratives, but the most important are the earliest known local sources including the Mesha stele.

The Iron Age I (1200-1000 BC) was mainly characterised by the retreat of Egyptian political power in the region, although its cultural influence remained obvious. The fortifications of cities declined despite the constant threats of invasions by the ‘Sea People’ who came from the Eastern Mediterranean islands, as well as other groups new to the region, including the Hebrews. This decline in defensive architecture may indicate that Jordan was far from such ducats.

The Iron Age II (1000-332 BC) was marked by socio-political and economic developments, represented by die emergence of the three kingdoms of Jordan: Ammon, Moab, and Edom. The cities regained their defensive walls, and defensive architecture such as forts and watchtowers were built along borders and routes. Settlement activities, however, expanded to areas outside the fortified cities and the number of habitation sites grew. Many people were living in unfortified towns, villages and even in isolated buildings or farmsteads.

The three kingdoms gradually took control over the international trade route, the King's Highway, and became engaged in an extensive trade network with their neighbours. The power of the Assyrians was growing at that time, and in 853 BC the Assyrian king Shalmaneser III defeated a coalition of Syrian kings, including the king of Ammon. Ammon, Moab and Edom became vassal states to the Assyrians and later the Babylonians.

The three kingdoms prospered under Mesopotamian domination, and produced their own distinctive culture. Writing became quite common among the people of the Jordanian kingdoms, who left many inscriptions, seals and scarabs in their own languages and scripts belonging to the northwestern Semitic group. The metal industry was also a major contributor to prosperity; a metallurgical industrial centre for iron production was found at Tal al-Hammah in the north (Ammon), and another for copper production at Faynan in the south (Edom).

Like their rise connected to trade along the King’s Highway, the decline of the Jordanian kingdoms seems to be connected with the rise in importance of another trade route, the Silk Road, which passed through Persia and at least partially played a role in the rise of the Persian superpower. Jordan came under Persian rule in 539 BC. The Persian rulers left their magnificent architecture in the capitals of the old Jordanian kingdoms, until they succumbed to the armies of Alexander the Great in 332 BC.

© Wall text in The Jordan Museum