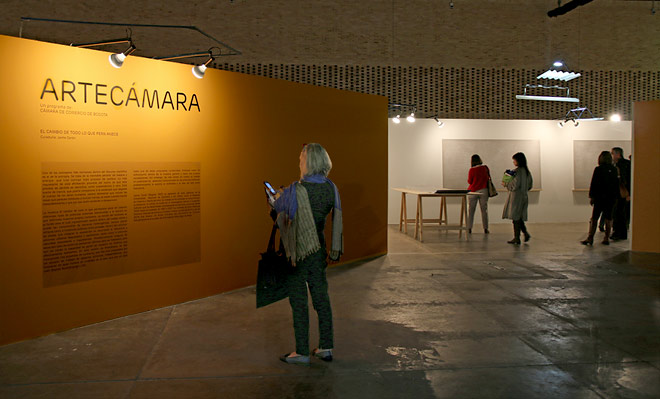 The Change of Everything that Remains

The Antecámara section seeks to promote the work of young Colombian artists who have no commercial representation. This year, Antecámara features the work of 48 young artists and 3 artist-run spaces, selected by curator Jaime Cerón through a national open call.

According to Jaime Cerón, "The Change of Everything that Remains exhibition brings into relation different kinds of creative practices related to the way we define our own contexts. The notion of context is the backdrop against which we enter the scene of the social arena and can be understood in different ways because it can be affiliated both to public and private instances. Among the collection of works that make up the exhibition, the reference to degraded and oppressive urban environments and evocative and disturbing natural environments is recurrent. Paradoxically, none of these kinds of environments seem suitable for habitation but nevertheless have the ability to put into question the spaces we do inhabit. The collection of works that give the idea of context as a private space refer to the way humans try to live inside their everyday spaces, conjugating different experiences from stillness to movement and often emphasizing the contingencies of the body. The works that express the context as a public space show the tensions between the notions of nature and culture, which make the city appear as a space saturated with contradictions where any kind of experience can take place."

Artecámara, a program of Bogota's Chamber of Commerce (CCB) since more than 10 years, encourages the circulation and promotion of new talents in visual arts and design. The Chamber of Commerce disposes of own exhibition halls located in the headquarters in the districts Chapinero, Salitre and Kennedy.

Informative photo tour through all the sections of the 10th International Art Fair of Bogotá, 24 - 27 October 2014.