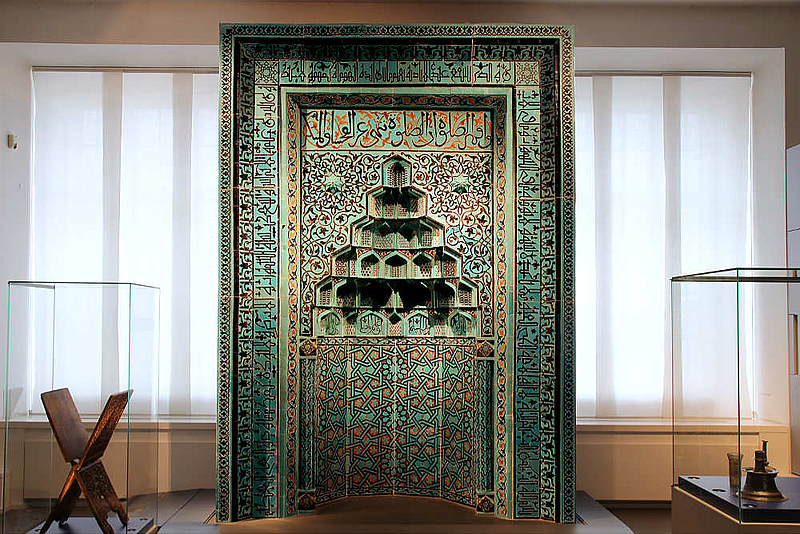 next
prev
detail
Detail of the prayer niche from Konya
© Foto: Haupt & Binder

This prayer niche (arab. miḥrāb) comes from the Beyhekim Mosque in Konya, which the personal physician of the Seljuk Sultan Kiliç Arslan IV. (died 1266) had built. In the 13th century, faience mosaics were popular in Anatolia for highlighting individual components, whereby the close connection between abstract ornament and religious inscription is particularly important.

The niche flanked by integrated columns shows interlacing with twelve-stars and radially assigned pentagons. On the stalactite vault (muqarnas), words of the Prophet Muhammad that refer to prayer appear alongside geometric filler motifs. In the forehead field, a verse from Sura 29 appears, and in the large three-sided frame the throne verse (Koran 2, 255), which is often quoted in sacred buildings, especially in prayer niches, because of its blessing power. Thus it also appears in the prayer niche of the Seljuk palace mosque of Konya, which is considered the model for this prayer niche.

The large faience decorations were the result of a collaboration between calligraphers and ornamental draughtsmen as well as tile manufacturers and cutters who, in an extremely labor-intensive process, put together a complete pattern from countless cut pieces of tile. In Konya, the capital of the Seljuks, 21 mosques in the 13th century were characterized by faience mosaics.