The grand palace Qasr al-Mshatta (in present-day Jordan) was probably built during the reign of the Umayyad caliph al-Walid II (743 -744), but remained unfinished because of his assassination. It is a key work of early Islamic architecture. The 33 m long and approx. 5 m high main facade of the southern outer wall, which is located in the Museum of Islamic Art Berlin, was donated to the German Emperor by the Turkish Sultan in 1903. The name Mshatta (winter camp) was adopted by the Bedouins, the original name is not known. More information below.

An acanthus frieze laid out as a zigzag band forms triangular areas from which large rosettes emerge. Each triangle is filled with different motifs. The base and the cornice are also richly decorated.

The Mshatta Façade includes two gate towers and parts of the portal's frame. In the ruins of the palace were found numerous fragments of sculptures representing humans and animals.

On the left side of the façade a paradise garden unfolds in detailed limestone reliefs. In each triangle the motifs change, including vines with grapes, various birds, animals and mythical creatures.

Pairs of animals normally enemies drink peacefully from the same goblet. Birds sit in the branches and peck at grapes.

Prey animals live peacefully together with domestic birds in a paradisiacal vineyard.

On the corner where the left tower and the long section of wall meet, the zigzag band of the acanthus frieze and a rosette have been skilfully placed. To the right on the tower you can see two mythical creatures, to the left two drinking animals.

A griffin and a centaur on the left tower. As the constellation Sagittarius, the mixed creature of man and horse is usually equipped with bow and arrow. But here it appears peaceful without its weapons.

Vine tendrils curl up into volutes surrounding animals and mythical creatures. The Mshatta Façade is a synthesis of diverse formal models and traditions of the region, which is also expressed in the mythological figures.

On the right, a Simurgh (peacock dragon) known in Persian mythology as a bird of protection with magical powers. It is depicted with a peacock tail and with the head of a dog.

Vines with bunches of grapes, leaves and tendrils, entwine to create medallions surrounding birds of different species pecking at the ripe grapes.

To the right of the entrance, no living beings appear, probably out of consideration for the mosque on the inside of the wall, to which a ban on images applied. The façade is decorated with dense vines, leaves and grapes. The lion was found in the palace.

The Mshatta Palace in Jordan. The 33 m long, richly decorated façade displayed in the Berlin Museum of Islamic Art is the centerpiece of the southern outer wall, 44 m long (in foreground on the photo). 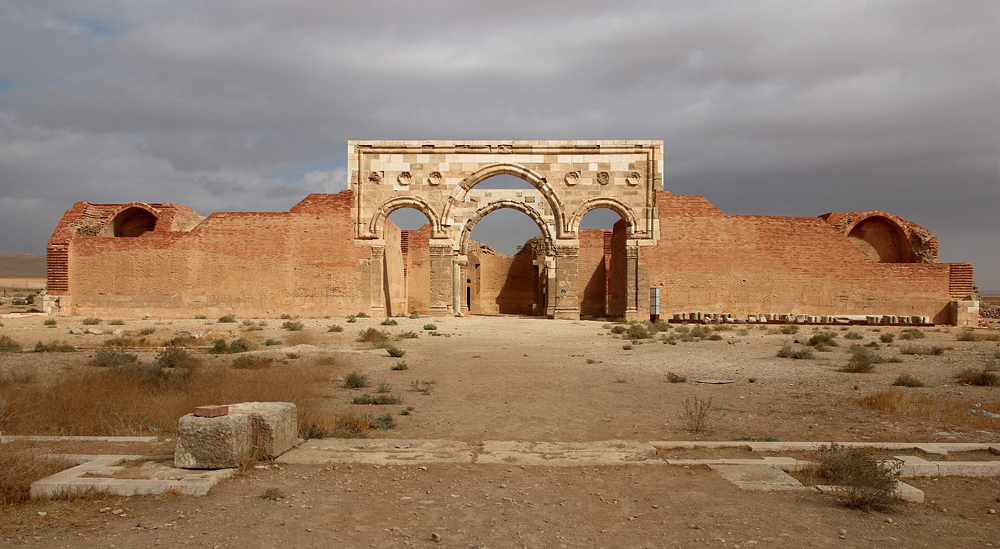 Information and photo tour through the archaeological site south of Amman. In "Art Destination Jordan" by UiU.

How the Mshatta Façade came to Berlin

The acquisition history as well as the further museological biography make Mshatta a prime example of a shared heritage and give it a model character for cooperation with the country of origin.

At the end of the 19th century, it was Rudolf Ernst Brünnow in particular who studied the monument in detail for the first time. On this basis and mediated by the Graz art historian Josef Strzygowski (1862-1941), Wilhelm von Bode (1845-1925) recognized the importance of Mshatta for scientific research. In 1902 he was able to attract the interest of the [German] Emperor to the façade. In a very short time Bode set all the necessary levers in motion to officially secure the façade as a gift from the Sultan for Berlin, to raise the funds for documentation and transport, and to organize the scientific documentation and dismantling. The fact that stones were stolen from the palace complex during the construction of the Hedjaz Railroad helped him with his arguments.

The donation of the façade would not have been possible without the personal friendship of the two monarchs, which had developed as a result of Emperor Wilhelm's visits to the Ottoman court (1889 and 1898), their similar economic interests and their shared autocratic political ideas. In addition to the agreement to build the Baghdad Railway and the visit to the Holy Land, the second trip in 1898 also brought with it the targeted promotion of German archaeology in the Ottoman Empire. ... On December 23, 1903, the royal gift, disassembled into 459 parts, arrived at the Kaiser Friedrich Museum (today's Bode Museum), which was still under construction.

One of the levels of meaning of the "massive" diplomatic gift is the connection with the region of origin. Today's Jordan was part of the Ottoman province of Syria until 1918. As legal successor, the Hashemite Kingdom of Jordan has confirmed the legality of the façade's remaining in Berlin. Both King Hussein (1935-1999) and in 2010 Prince Hamzah ibn al-Hussein, the brother of the current King of Jordan, and most recently in 2011 the responsible minister Haifa Abu Ghazaleh, have made positive statements during their visits about the fact that Jordan's cultural heritage is prominently displayed in Germany. The German-Jordanian restoration workshop in June 2011 also expressed its commitment to the reciprocal responsibility and care of the site near Amman and the façade in Berlin. The awareness of a common cultural heritage bears a special responsibility for a key work of late antiquity and early Islamic art.

Book recommendation, the most comprehensive publication: 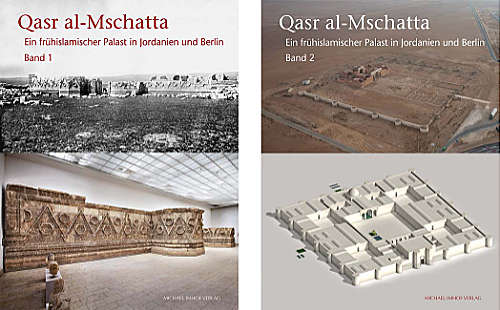 more about (in German)