The dome, built around 1320, was once part of the Palacio del Partal in the Alhambra in Granada, built for the Nasrid rulers, the last Muslim dynasty in Spain (1238 - 1492). Like a "celestial canopy" it vaulted over the top room of a tower, the Torre de las Damas. The German banker Arthur von Gwinner bought the land with the tower from private owners and donated it to the Spanish state when he returned to Berlin in 1891. In return, he obtained official permission to dismantle the wooden cupola and take it with him. More information below.

The basic form of a 355 x 355 cm square becomes an octagon through spandrels in the corners, above which 16 trapezoidal segments unite to form the 190 cm high dome with a star ornament at the apex.

The 16 segments of the domed ceiling meet at the interlaced star ornament of the apex. The carvings of cedar and poplar wood were originally bordered in color, as evidenced by the remains of red, blue and green painting.

The 16 trapezoids are decorated with interlaced geometric ornaments. The Nasrid rulers' motto "There is no victor but God" repeatedly appears in the center of the octagonal stars.

The transition from the octagon to the 16-sided base for the trapezoidal segments of the ceiling is achieved by narrow triangles with shell motifs. The dome rests on a stalactite cornice (muqarnas).

A cornice of stalactite arches (muqarnas) with the incessantly repeated Nasrid motto "There is no victor but God", which is probably also to be seen in the context of the threat of the Reconquista.

On the panels of the octagonal base, there are arches with kufic inscriptions and pine cones. The spandrels between them and the background are decorated with shells and arabesques.

The triangles in each corner of the square room are decorated with geometric interlacing and plant motifs. A miniature cupola is placed in the center. 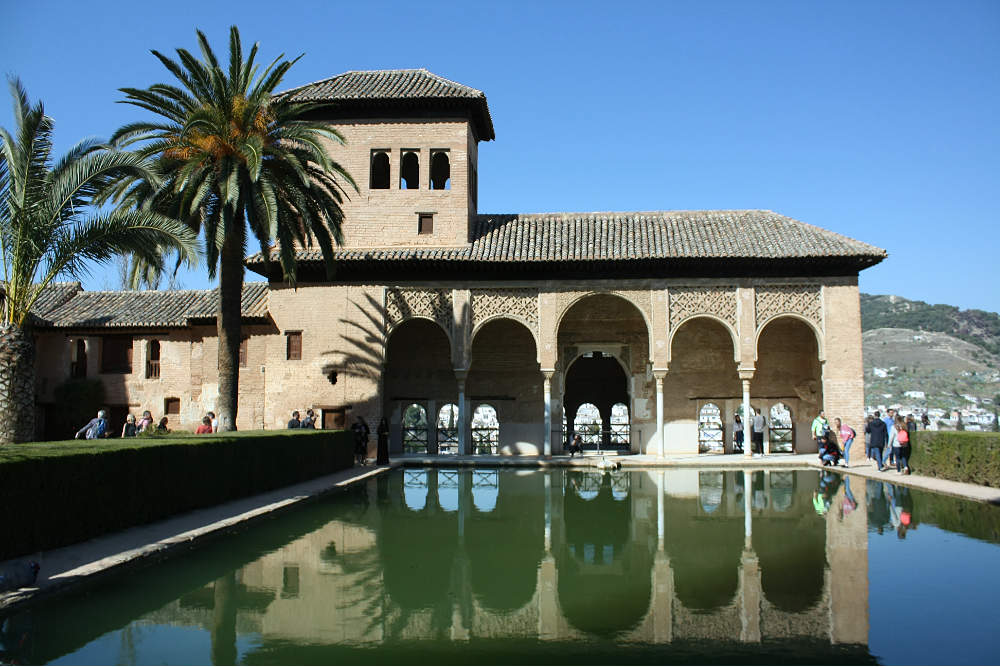 The Palacio del Partal with its arcade hall next to a large water basin is located in the complex of the Alhambra, the palace city overlooking Granada in southern Spain, which was founded under the Nasrid ruler Muhammad III. (ruled 1302-1309).

The Alhambra cupola once roofed the observation tower of this palace. In the 19th century, when parts of the Alhambra were privately owned, it was called "Torre de las Damas" (Tower of the Ladies).

How the Alhambra Cupola came to Berlin

This is a story connected with the increasing appreciation of the oriental style in the 19th century, when distinguished Berliners furnished their homes with orientalizing rooms. The Alhambra dome was also acquired for installation in a private house. Its buyer was Arthur von Gwinner (1856-1931), one of the most important financial magnates of his time and a great Alhambra lover. While he was on foreign assignments in Madrid, he visited Granada and, what seems surprising from today's perspective, acquired the Palacio del Partal, which was then in private hands. The Spanish crown had sold parts of the Alhambra at the beginning of the 19th century. When Gwinner returned to Berlin in 1891, he donated the building to the Spanish state, but took the wooden dome with him and had it installed in his apartments, first at Rauchstraße 1 and later at Sophienstraße 25. Before World War II, it was dismantled and later brought to West Germany. Gwinners heirs sold it to the Berlin Museum in 1978.

© From a text in the Museum of Islamic Art Berlin.
© Translation from German: Universes in Universe.