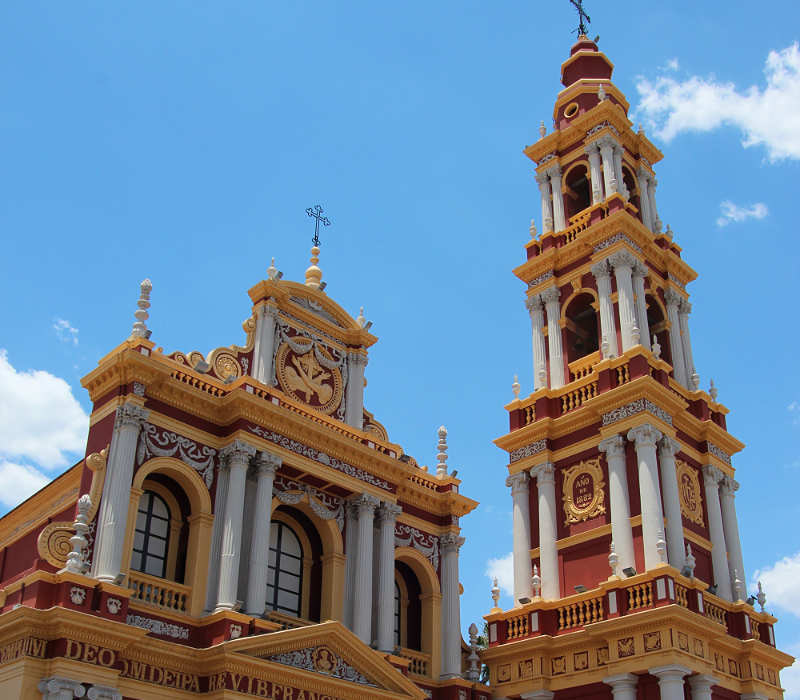 The San Francisco Cultural Complex is integrated by the Basilica Menor and the San Francisco Convent, the Museum of Sacred Art "Fray Luis Giorgi", a historic Library and Archive. With the intense colors of terracotta, ivory and white of its Italianate style ornamentation, and its 54 m high bell tower, the tallest in South America, it is one of the iconic monuments of the city of Salta.

The first settlement of the Franciscans took place towards the end of the 16th century, on the land assigned to them at the time of the foundation of the city of Salta. The first adobe buildings were destroyed by earthquakes and fires. The present one is the third church, whose construction began in 1759 according to the plans of the architect Fray Vicente Muñoz. It also suffered successive fires and renovations.

Between 1868 and 1882 the façade was redesigned by the Franciscan architect Luis Giorgi. Of Italian influence, it displays a fine ornamentation of garlands, flowers, inscriptions, coats of arms and blinded windows. Each of the three entrance arches, framed by double Ionic columns, has a stucco curtain of scenographic drapery, which conceals the difference in height of the exterior and interior arches. In the second order the columns of the arches have Corinthian capitals. At the top of the façade the central attic displays the Franciscan coat of arms representing the left arm of St. Francis, crossed with the right arm of Jesus, both with the stigma of the Passion, the wound produced by the nail with which Jesus was fastened to the Cross.

On the small square in front of the façade stands a monument to St. Francis of Assisi, a work of the Italian sculptor Tonini, erected in 1926.

The magnificent bell tower, 54 m high, built in 1877 by the Swiss Francisco Righetti on a project of the German José Enrique Teodoro Rauch, is divided into four superimposed bodies whose square bases taper upwards and whose columns are respectively of Doric, Ionic, Corinthian and composite order. Each body has a perimeter balustrade with vases as pinnacles at the corners.

The church preserves the first bell of the tower, the so-called "Campana de la Patria" (Bell of the Homeland), cast with the bronze of the cannons of the Battle of Salta, in which the Army of the North under the command of General Manuel Belgrano defeated the Spanish troops in 1813.

The large single nave is covered by a barrel vault. Over the transept rises the central dome on pendentives and drum, built in the eighteenth century, which is considered the "little sister" of the famous Cathedral of Cordoba, both made by Fray Vicente Muñoz. A small dome with terminal lantern completes its structure.

The decoration of the dome and vault is the work of Father Luis Giorgi maintaining the stylistic unity with the exterior ornamentation. The basilica floor plan culminates in a high altar rich in colored marble. The altarpiece attached to the end wall, in neo-Renaissance style, is also the work of Giorgi.

The convent was built along with the church and underwent many modifications over time. Its expansion around the magnificent cloister dates from the middle of the 18th century.

In the old cells is housed the Museum of Sacred Art "Fray Luis Giorgi" that keeps remarkable pieces, of which the friars were custodians for years. In the first rooms you can see furniture, musical instruments, silverware, liturgical objects and imaginery of the eighteenth and nineteenth centuries; works of art from Cuzco and indigenous missions.

In the arches of the gallery there are murals on the life of St. Francis of Assisi, made in 1946 by the German painter Francis Luscher, who had people related to the convent as models to create the characters.

In the second part of the visit you can access the upper floor and the high passages of the church where a historical and experiential tour unfolds with artifacts and old photographs, founding documents, tools from the different workshops of the convent, objects of the candle and host factory, printing elements of La Voz Seráfica (a Franciscan newspaper), rooms with mural photographs in an installation that represents the different Franciscan missions found along Route 34 leading to Bolivia. You can also see the space where the architect and sculptor Friar Luis Giorgi was supposed to have worked, because on the walls there are sketches of the decorations of the basilica.

The convent also houses an extraordinary library and archive that preserves more than fifteen thousand volumes carefully ordered by Father José Tito Collalunga (1896-1981), who served as the convent's librarian from 1925 until his death. Many are very valuable, including a 15th century treatise on astronomy from Venice. The archive contains also important historical document

Framing the entrance to the museum, to the right of the bell tower, there is a ceramic mural in honor of Fray Mamerto Esquiú by Elsa Salfity (1931-2004), a well-known artist and teacher from Salta. Made between 1976 and 1978, the 16 m2 mural consists of two large vertical reliefs and a horizontal one in the tympanum. They pay homage to Fray Mamerto Esquiú, Argentine friar and bishop (1826 - 1883), famous for his sermon in defense of the Constitution of 1853, the constitution that laid the legal foundations of the State of the current Argentine Republic.

Summary and translations by Universes in Universe from information of the Secretaría de Cultura y Turismo of Salta and other sources. 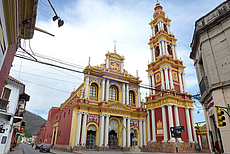 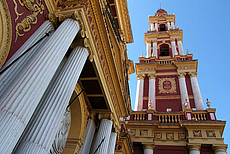 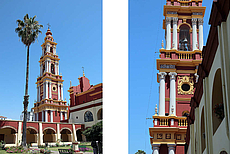 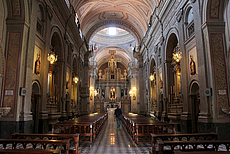 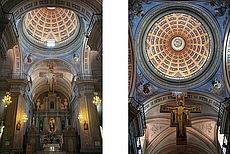 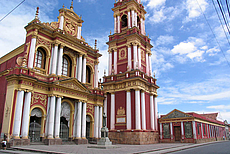 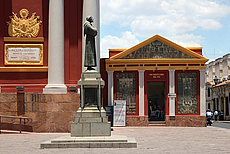 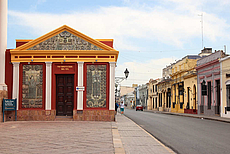