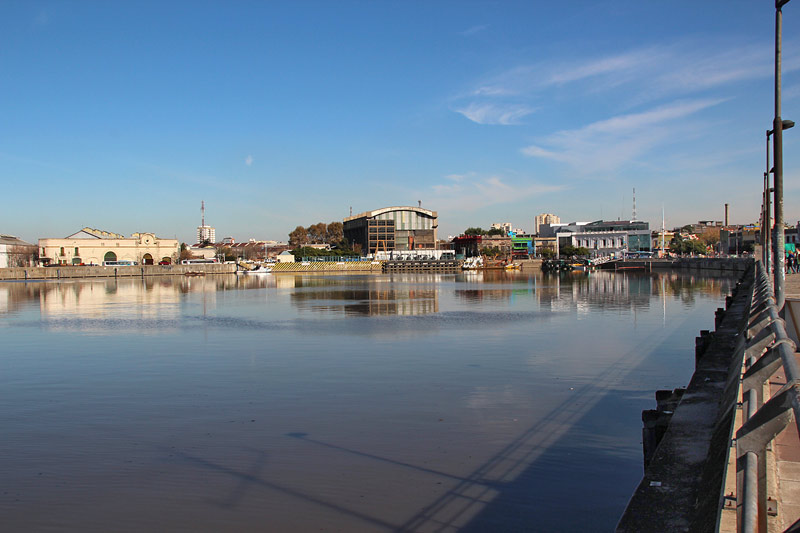 This walk of 1,5 km goes around the heart of the popular "barrio" (quarter) of La Boca. Starting at Fundación Proa, an exhibition center of international fame, and the "Caminito" passage, well-liked by tourists because of its colorful houses, one can walk along the riverside promenade of the Riachuelo, getting an interesting perspective of the "Vuelta de Rocha" (bend of the river). Passing by the Museum of the legendary painter Quinquela Martín, the walk ends at the old Transporter Bridge (1914), a landmark of the area.

The La Boca neighborhood is part of an area designated as the "Distrito de las Artes" (Art District) by the Government of the City, to foster the development of the artistic sector, promoting investment, and improving the urbanization and infrastructure.

La Boca is located in the Southeast of the city. It is named after the "mouth" of the Riachuelo (little river), which flows there into the Rio de la Plata. It is believed that in that area was the first foundation of Buenos Aires by Pedro de Mendoza in 1536, settlement that had to be abandoned already in 1541.

In the second half of the 19th century, numerous Italian immigrants settled there, because of the working possibilities offered by the port. They constructed their houses out of wood planks and corrugated iron, and used the remnants of paint from the shipyards to protect and color the walls. The quarter also attracted bohemian, artists and musicians. In the XX century, the artist Quinquela Martín did a lot for the improvement of the neighborhood. On the land which he donated to the State in 1933, a primary school openend in 1936, and the Museum of art that carries his name, two years later. Following his initiative and that of other neighbors, in order to recuperate a dirty and desolated passage and convert it into a lively and colorful street, "Caminito" was created as a "Museum Street" in the 1950s.

Despite all those efforts, during a long time the area remained neglected and marked by the contamination of the Riachuelo's water, with abandoned factories, sheeps and bridges, as well as precarious dwellings.

The recuperation of the port area of La Boca in the 1990s moved forward, to a large extend, due to the cultural activities of the Proa Foundation, inaugurated in 1996 in a house from the end of the 19th century. The excellent quality of the exhibitions it organizes, from cutting-edge art projects to collections of archeology, have brought international recognition to the foundation. From the restaurant terrace, there is a great panoramic view of the area. Some of the most important art venues and historical sites Through the Southern part of San Telmo neighborhood