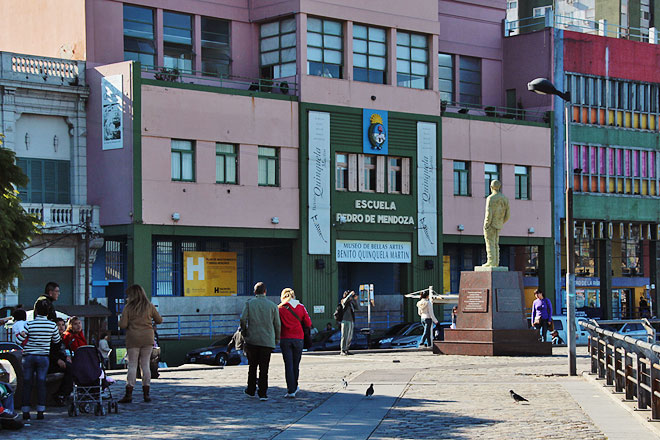 Benito Quinquela Martín (Buenos Aires, 1890 - 1977) is one of the most popular artists in Argentina. Self-taught painter, his style is characteristic for the use of the palette knife or spatula to apply oil colors instead of the traditional brush. His paintings of the port life in La Boca are his best known works.

Of humble origin, he always sought to help his neighbors and to improve the living conditions in the "barrio" (quarter) of La Boca. In 1933, he donated a plot of land to the State to construct a building destined to a primary school, a Museum of Argentine Artists and a space for living and artist studio. The Escuela Pedro de Mendoza, which combined art and pedagogy, was inaugurated in 1936.

Two years later, the Museum opened its doors. It is located on the third floor of the school. It has 12 exhibition halls and 3 terraces with sculptures, and displays works by Quinquela Martín and other Argentinean figurative artists, as well as a collection of carved figureheads from the late 19th century. In the Sívori hall, the museum organizes temporary exhibitions of established or emerging artists. A visit to the popular quarter: The Proa Foundation, the colorful Caminito passage, Museo Quinquela Martín, along the Riachuelo to the old Bridge.